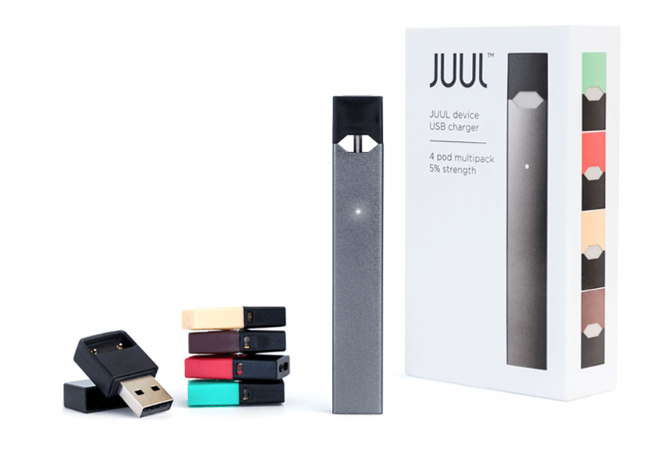 I’m as out of touch as my parents were as far as what teens are up to. I had to look up “Fortnite” yesterday. I spelled it like the poetic way to say “two weeks.” Generally, if it doesn’t involve spreading venereal disease/getting pregnant, driving intoxicated or frying their brains on alcohol or hard drugs, I’m happy enough to leave it be.

Juul, though, is a something  that scares the hell out of me. Maybe not quite to the point of teen pregnancy or heroin addiction, but with 15-year-old and 12-year-old daughters, Juul is now seriously on my mind.

First, a thanks to the New Yorker and Jia Tolentino for a typically excellent rundown of what Juul and e-cigarettes in general are all about. (The New York Times/Amos Barshad did a good piece on it April, too.) Highly recommended reading in full, both of them. But a brief summary, in no particular order, from memory. Some of this is from the article, some of it not. You should be able to discern which is which:

East High School in Denver, like apparently all high schools in the western hemisphere, is Juul-infested. I talked to Lily, 15, about it. She described well-established black markets for pods and how kids are using them all over the place — the exact conversations the above writers had with high schoolers in their stories. And if you think these kids aren’t hitting their Juuls hard enough to get a wicked buzz, over and over, all day, you’re dreaming. “Teen” and “moderation” are damn-near antonyms.

What to do? Lily is a competitive skater and for the time being doesn’t have the time for it. I told her and her sister it’s an insane thing to start doing if only because, at minimum, it’ll cost you a fortune and, quite possibly, you may never be able to stop. And you’re messing with your brain, forever. How that will hold up against social cachet and cascades of sweet dopamine, time will tell.