I’m on the Asahi Glass Foundation mailing list. Despite being made of glass, this is a serious foundation, most famous for its annual bestowing of the Blue Planet Prize.

When I say mailing  list, I mean this literally — you get paper-based mail. The interesting thing that, despite being based in Chiyoda-ku, Tokyo, my mail from the Asahi Glass Foundation comes via Brunei, on the northern tip of Borneo. I once spent a night in an airport there.

In addition to the Blue Planet Prize, the foundation does something called the “Questionnaire on Environmental Problems and the Survival of Humankind.” I fill it out every April (one can do this online). The most recent results were apparently released on Sept. 5, 2013. I just got them a few days ago, perhaps because they’re mailing via Brunei.

I was one of 1,364 respondents last April. The survey asked questions about the perceived nature of environmental problems and their possible consequences. Going in-depth here is beyond the scope of this post (all 22  years’ worth of .pdfs are posted here). Suffice it to say that we respondents collectively set the environmental doomsday clock at 9:19 p.m. At 161 minutes to midnight, we were considerably more optimistic than the folks over at the Bulletin of the Atomic Scientists, whose doomsday clock stands at 5 minutes to midnight. We gave the planet four more minutes than the previous year, though 90 minutes less than when the folks at Asahi launched the survey in 1992.

It breaks the prioritizations down by country and region, which is interesting. In the Middle East, zero percent of respondents believed that “stringent standards for auto emissions and energy waste” were desirable government measures to mitigate environmental burdens. Imagine that. In “Korea” (my guess this means South Korea, most North Koreans being too malnourished to type), 24 percent thought this might be a good idea.

The survey’s crowning achievement, though, was in a separate sheet of paper, which I photographed on my kitchen floor. 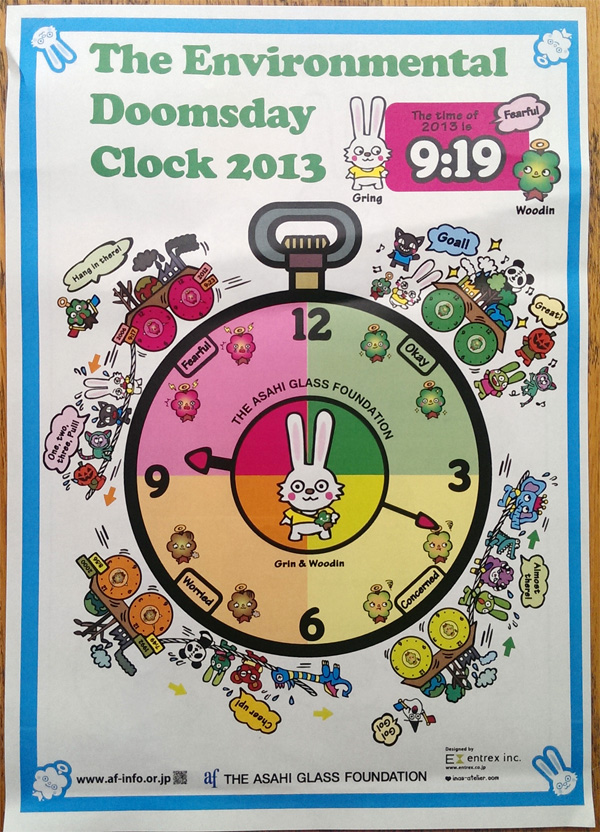 This has not been photoshopped.

“Oh,” she said, and was off to play Subway Surfer on her Christmas Kindle Fire.

My initial reaction was to chuckle at the depiction. I mean, who names a rabbit “Gring?” (As a white rabbit, “Gringo” might have worked, though). Or is the name “Grin” after all (see the bottom-center of the wheel)? And these other characters — what’s with the pumpkin dude and the three-eyed rabbit-alien? Why is the panda a doll and not real? And if that’s Dumbo, did you get the OK from Disney?

But on second thought, I began to wonder if maybe the Asahi people aren’t onto something. Scads of dry, terrifying IPCC reports haven’t turned much of a tide — certainly they haven’t affected Middle Eastern survey respondents. The great problem with environmental communication — particularly climate communication — is that it’s faceless. It’s about the fish tank and not the fish. Maybe we need more colorful little Grings and Woodins and crowned elephants and blue dragons. Hello Kitty, another Japanese development, may be widely mocked, but it’s universal. Maybe cute is just what we need to connect people with the drivers of environmental doomsday.