HomeClimateAl Bartlett and the Essential Exponential

Al Bartlett and the Essential Exponential 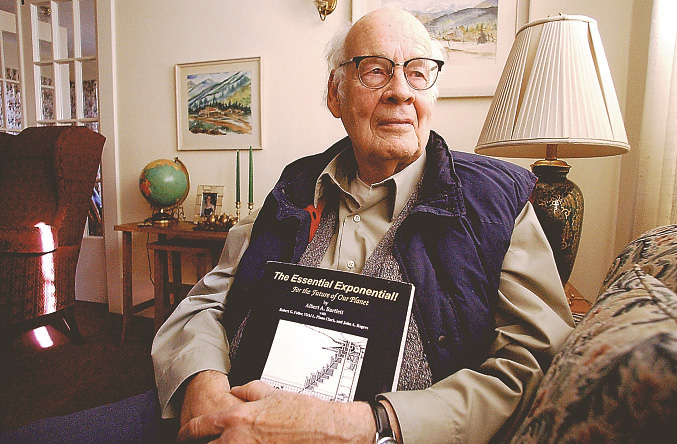 Al Bartlett, Boulder physics professor emeritus who dedicated his post-retirement career to preserving Boulder and trying to get people not as smart as him (which was pretty much everybody) to understand the exponential function and its environmental and social impacts, died over the weekend. Brittany Anas, my former colleague at the Camera, did a very nice piece on him, so I won’t belabor the big picture. Except, I guess, to say that without Bartlett and the Blue Line he backed, Boulder’s foothills would look like those north of Phoenix, crawling with single-family homes until too steep to build.

Al was a great guy, and he was present at creation during the University of Colorado “Rocket Project” that spawned both today’s LASP, the largest university-based space science and engineering house in the world, and  Ball Aerospace, builder of Hubble instruments, spacecraft and other dizzyingly complex hunks of space hardware. He helped me understand the lay of the land around the CU physics department and its personalities for the book, too.

I did a feature on him in early 2005, back when he had only given his “exponential” talk  1,540 times (he got to 1,700, ultimately, and according to Brittany, there’s a team of followers poised to carry the message onward — though Al’s already immortal on YouTube. Nearly 5 million views.).

Many don’t like the message. But the it’s just math. Others choose to turn Bartlett’s pessimism on its head, and that works, too — see Ray Kurzweil. Fact is, we misunderstand the exponential regardless of application, whether it has to do with our impact on the planet or the pace of innovation that might stem that impact.

Professor talks at exponential rate – Bartlett has given speech on growth 1,540 times

Albert Bartlett has given the same presentation 1,540 times.

That’s the equivalent of once a day, every day, for more than four years. But the 81-year-old physics professor emeritus at the University of Colorado has spread things out a bit. He has been teaching his lesson on the power — and danger — of exponential growth since 1969.

This week, he’s presenting “Arithmetic, Population and Energy” four times — twice at CU in Boulder, once at CU-Denver, and, on Friday, at California State University, Fresno. He expects to present it between 30 and 40 times this year, mostly at CU-Boulder.

“That was too much,” Bartlett said last week from his Boulder home.

In 1987, he gave it seven times in a single day, to high school students in Brush. At that pace, he could have knocked out all 1,540 in about seven months, including weekends.

These statistics — and many, many others — are in a book published last year. It’s called “The Essential Exponential!: For the Future of Our Planet.” Compiled by Bartlett devotees at the University of Nebraska at Lincoln, it is a compendium of journal articles by Bartlett and others with the same message: exponential growth of human population and natural-resource consumption can`t happen forever.

It’s all in the mathematics of compound growth. For investors, a constant 7 percent return doubles your capital in 10 years. But the same dynamic can be calamitous to the environment, Bartlett contends.

For example, a population of 10,000 growing at a constant 7 percent rate will hit 10 million a century later.

Robert Malthus, who in a 1798 essay predicted mass starvation because population growth was outstripping food production, was a major intellectual influence on Bartlett .

The agricultural revolution has only delayed the problem, Bartlett says. More people are starving today than ever, and per-capita global grain production has been falling since the 1980s, he said. Further, the engine of all this crop growth is petroleum-based fertilizer, and oil is a finite resource whose production peak could be happening now, Bartlett said. (More sanguine forecasters estimate global peak oil production in 2035.)

He likes to cite the late economist Kenneth Boulding’s “Dismal Theorem,” which says: “If the only ultimate check on growth of populations is misery, the population will grow until it is miserable enough to stop its growth.”

Boulding, for the record, also had a “Moderately Cheerful Form of the Dismal Theorem,” which says, if humanity can react to forces other than misery and starvation, we’ll be just fine.

Bartlett believes such proactivity hinges on ending the widespread “innumeracy” — illiteracy with numbers — with respect to the hard truths of exponential growth.

He says capitalism can survive without population growth. The fertility rates in Italy and Spain have long been below replacement, he notes.

“It’s not been a disaster,” Bartlett said.

Bartlett rails against population growth, which, he says, “never pays for itself.” He says building more reservoirs and highways doesn`t solve problems, but rather invites even more growth and bigger hurdles down the road. Politicians lack the will to view population growth as something to be avoided and not invited, he says.

Bartlett has many fans and admirers, especially among scientists who appreciate a scientific message delivered in a memorable, blunt and funny way, said Larry Nation, communications director of the American Association of Petroleum Geologists, which hosted a Bartlett presentation at a convention in Dallas last year.

“He sat down in a chair and you felt like you were talking to your uncle, who by God is going to tell you how the cow eats cabbage,” Nation said.

“I feel sort of like Billy Graham. I`m an evangelist. You’ve got to get it out to the people,” Bartlett said. “I`ll do it as long as I can.”

For those who quit because of vaccination requirements: potential future employers will surely be impressed by your bold refusal to join the 2.36 billion who are fully vaccinated by modern medical miracles that are safe, effective, and save countless lives. #COVIDVaccination