HomeHealth CareAre we fat because of a ‘Fat Switch’?

Are we fat because of a ‘Fat Switch’?

When things go wrong, it’s always nice to be able to blame someone else. Thanks to Richard Johnson, MD, of the University of Colorado School of Medicine, we can blame our extra pounds on a 20-pound primate that lived about 15 million years ago. 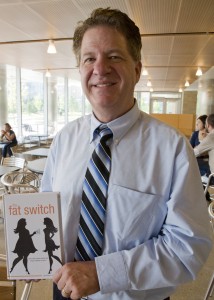 And, of course, fructokinase, triggered, of course, by fructose, in which we’re drenched. Plus other factors, Johnson explains, in a very, very interesting new book called “The Fat Switch.” The bottom line: our predilection for porkiness is not simply a matter of calories in versus calories out. No, back in the feast-or-famine Miocene epoch, a primate that could store fat faster had a better shot at surviving the hungriest of times. We all descended from one such primate, Johnson’s research team has established.

Similar processes happen today with hibernating animals. ln essence, at a cellular level, the Fat Switch tells us to burn less energy and put on the pounds, pronto.

I wrote a story about “The Fat Switch” in the most recent edition of UCH Insider, and then, when called upon to come up with a column idea on short notice, wrote another story about it.

The hypothesis is that uric acid wreaks havoc on our system, and that uric acid’s production is triggered by fructose, which sparks a flurry of fructokinase (an enzyme) activity in our cells, which has, potentially, other harmful effects as well. Johnson’s research team has done molecular-scale work to tease out some of these hypothesis. Some of the research —  four papers worth, he said — remains in review, so the general-interest book is coming out before the research is actually published.