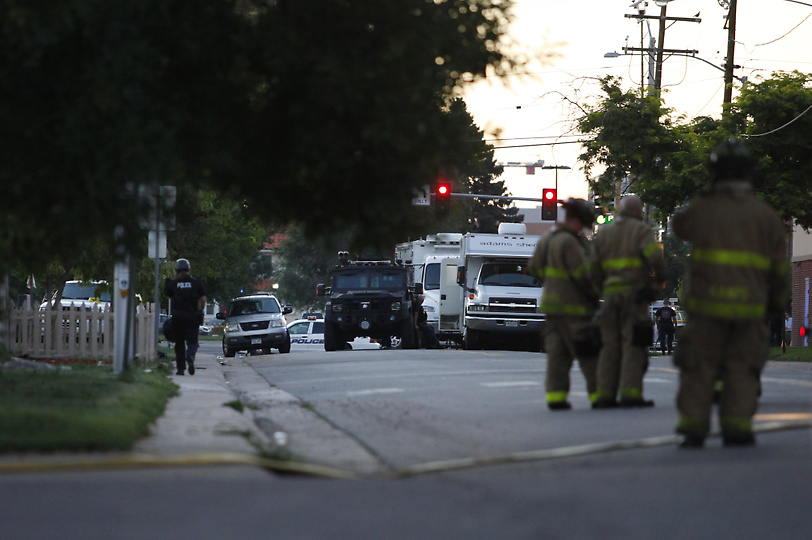 I was planning on riding my bike over to University of Colorado Hospital this afternoon, but a three square block area through which I normally pedal has been cordoned off. You see, James Holmes, 24, the alleged Dark Night murderer — who just after midnight allegedly opened fire in the Century 16 at the Aurora Mall, lived in a building at 17th Avenue and Peoria Street that I pedal past just before entering the Anschutz Medical Campus.

He has apparently booby trapped the place in a sophisticated way. A brilliant application of upper-middle-class San Diego/University of Colorado talent, booby trapping a low-rent apartment and shooting 50 people in a movie theater. Your mom, whose house is apparently surrounded by media trucks out in Cali, is surely proud, James Holmes.

University of Colorado Hospital, for whom I do a lot of writing, mobilized admirably, taking 20 of the victims; the Medical Center of Aurora, where my oldest daughter was born, Children’s Hospital Colorado, and Swedish Medical Center shared the rest, as far as I know.

I hopped over to the NRA site, which is bereft of comment on this horrific act. The NRA has a policy of not commenting on the horrific acts committed indirectly through its twisted — and now legally entrenched all the way down to municipal code — interpretation of the Second Amendment. Lots of blather about supporting law-abiding use of guns. Not much talk about gutting safeguards that might help law enforcement keep guns out of the hands of alleged whackjobs like James Holmes, who apparently qualified as a one-man, moviegoer-battling militia. Way to go, NRA.

Our gun laws our like many of our laws — legalistic (and maybe jingoistic, in the case of gun laws) rather than rational. Occam’s razor has been long abandoned for a menagerie of cutting tools that yield Kafkaesque outcomes.

As an aside, the idea that concealed carry laws enhance safety is ludicrous. The man threw smoke bombs and had an extraordinary tactical advantage. Stopping him before he did enormous damage would have required a suited-up SWAT team in the front row, nibbling popcorn, fingers on triggers. Same would hold if you were mugged. If someone’s already pointing a gun at your head, you’re going to have a helluva time reaching for yours.

In short, it’s nuts, it’s tragic, it’s sad, we deserve better. My heart goes out to the victims and their families.