My book, From Jars to the Stars, won the 2011 Colorado Book Award for History at the annual Colorado Humanities and Center for the Book ceremony in Aspen last Friday. This is particularly gratifying to me because, being the history category, it’s an indication that the book is readable.

I’ve found myself trying to explain this — no, really, it’s not that technical… you can  handle it… it’s narrative nonfiction, a yarn, not a science textbook or engineering manual…  Now I can just say, well, it won the Colorado Book Award for History. 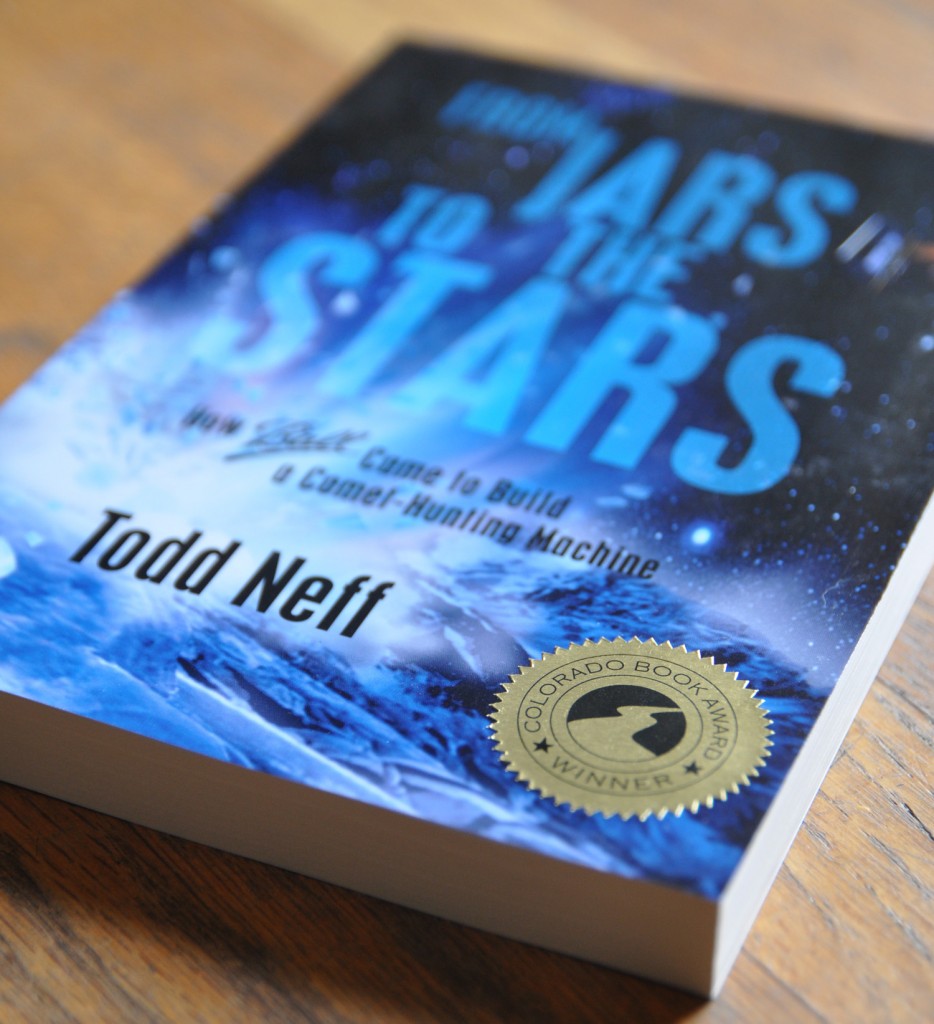 "From Jars to the Stars" now comes with a shiny gold sticker.

My nine-year-old daughter Lily having had a skating competition in Colorado Springs and thereby tying up her mother, I brought Maya, my six-year-old, along. I bought her off with a lot of swimming in the immense Glenwood Springs pool (we stayed in Glenwood, Aspen being booked up) and, on the way home, a wild couple of rides at the Breckenridge Peak 8 fun park.

I had to buy Maya off twice because she suffered two formal, adult-filled events. First the ceremony itself at Aspen Meadows on Friday; then a talk I gave to the Colorado Humanities board at the Glenwood Springs Residence Inn on Saturday. I provided a bit of backstory on the book. I’ve pasted it below — it’s not really a transcript as I largely winged it, but it is what I wrote up in advance.

Afterward, I asked Maya what she thought about the talk, which ran about 17 minutes.

But witnessing it all must have planted some deeper curiosity regarding the odd creature who sired her. In the car on the way home, not long after a parade of about 30 Lamborghinis ripped by us as our minivan lumbered up Vail pass, Maya asked: “What’s your favorite thing to do? Talk to people? Or drink beer with people?”

The latter, Maya. Definitely the latter.

I’d like to talk a bit about how From Jars to the Stars came to be and then share a couple of nonscientific insights into the creative process.

You learn a good deal when you write a book – about yourself as much as the topics. Many of you aren’t writers per se, but I think some of the lessons apply to ordinary civilians, too.

First, a bit of history.

–         Covered the Deep Impact mission as science and environment writer for the Boulder Daily Camera. Saw the spacecraft 1x.

–         Landed an agent through Mike Cote, then the city editor at the Boulder Daily Camera. A lovely woman named Barbara Bova, who helped me amass probably 20 rejection letters. She came very close with the U.S. Naval Institute Press – editor liked it, marketing worried about sales prospects. I did not realize at this point that roughly one space book has ever sold well – Tom Wolfe’s “The Right Stuff.”

–          Got a Ted Scripps Fellowship in Environmental Journalism at CU, in which I studied renewable energy, but kept forging ahead on this thing as Barbara continued to pitch editors. I had by this time taken so many people’s time and became so engrossed in the story and the quality of these people that I decided to just do it. Because I realized that:

Then Barbara died of cancer. An old friend, a brilliant designer and writer David Barringer, convinced me to just do it myself with his help. I figured if no one was going to publish it, I’d create a publisher to do it.

So that’s how this all came about. Now for a bit about what I learned that might be relevant to your lives. The first thing has to do with the “morning person” vs. “night owl” myth.

I would submit that before there were electric lights we were all morning people anyway – forged into our DNA while were still furry.

I got up at 4:30 a.m. while I was writing this thing. Actually getting out of the bed was beastly; once you’re up, though, you’re up. I’d fire up a mint tea and sit down at the keyboard. I found that in the morning, my brain can handle much more complexity – you can juggle several cognitive balls, which you need to do when trying to thread together a coherent story line from events that, in the case of From Jars to the Stars, were happening at the same time. You can prioritize better, too – you can see what’s relevant enough to stay on the periphery of the story and what needs to be cut. A good 300-page book, after all, is as tightly edited as a newspaper story – nothing extraneous, everything bunched around the narrative thread.

You can turn great writing into tripe by not killing your babies. I’m not talking about infanticide, but rather about whacking everything that’s there because you particularly fancy it despite it not quite fitting.

My early drafts From Jars to the Stars were full of babies – little things I thought were interesting. I had the benefit of this friend David Barringer, who beat the hell out of me and focused the thing. It’s a good 10,000 words shorter than the first draft.

So we’re all morning people. Morning could be 5 a.m. or noon, depending on when you get to bed, by the way. So the bottom line is: Do the hard stuff first.

But we’re all night owls, too.

At night, you’re fried from running around all day, commuting, working, ferrying around kids, , just living life. High-level conceptual and organizational work is possible, but it’s way less efficient, and you’re more likely than not going to find yourself in the middle of an ESPN.com story about Euro 2012 without being able to remember how you got there.

But at night I find myself to be more creative in the micro-sense.  I tend to come up with “big ideas” or funny turns or synthesis of diverse notions that have been swimming around my subconscious. When I give talks about From Jars to the Stars, I wrap it up with what I call my “Carl Sagan moment.”

Deep Impact’s image of the impactor atomizing against the belly of comet Tempel 1 belongs with a handful of photos depicting just how far earthly evolution has come in the 4.6 billion years since the ices and organic chemicals of comets began agglomerating into our rocky planet. In such an exclusive album belong the Apollo 8 “Earthrise”; the Voyager “pale blue dot” image of Earth from beyond the orbit of Pluto; Cassini’s shot of Saturn aglow, backlit by the sun; and any one of a slew of images the Mars Exploration Rovers have snapped of their own caterpillar tracks on Martian soil. To capture such beauty took some of our most advanced technologies, some of our brightest people, exquisite coordination, enormous riches, and, perhaps most importantly, a collective desire to explore. These photos are our pyramids.

The original version of that I’d scribbled in the dark on a notepad next to my bed at like 2 a.m. So I guess you could say the memorable stuff emerges from a tired mind. To take it back to the caveman analogy, I think the mind somehow has been trained to the point of genetic predisposition to open up at night, maybe to allow it to envision better stories around the flickering campfire.

But make no mistake: Literary creativity – at least nonfiction literary creativity – demands organization.  I started my career at the global IT consulting firm known as Accenture, and developed a soft spot for spreadsheets. I used them in writing the book .

My master spreadsheet for “from Jars to the Stars” had 337 kilobytes of text, which is a lot of text. I had 10 tabs. One was for numbers – every calculation I made is in there – that a ton of TNT imparts 3.9583 gigajoules of energy, that an adult male standing on comet Tempel  1 would weigh about as much as a penny does on Earth. Others tabs are full of Web links, cross-references, things I had to verify, even “deep thoughts.” Most of those didn’t make the book, though I parked the “Carl Sagan Moment” there and it did survive, though heavily edited.

Smoking-Gauloises-while-wearing-a-beret sort of creativity is useless without a foundation of organization. To succeed in writing you have to balance literary creativity and mundane time and task management. One of the biggest benefits of doing this is to create a parking place for relevant distractions while you’re trying to write. By relevant distraction I mean, when you’re writing about something that happened in the 1950s, you think – ah, that’s relevant to something that happened in the 1990s! It’s important, but if you stop what you’re doing in the 1950s, you’ll lose the thread and slow the whole process down When I show this speradsheet to other writers, they shake their heads, because many writers have a visceral fear of spreadsheets and numbers, which is a shame.

Dan Baum, the former New Yorker writer and author, came to CU to talk to us Scripps fellows right around the time I’d decided to forge ahead with the book. Baum is a freelance writer and author (most notably, of “Nine Lives,” about New Orleans), and is relentlessly focused on financial return for his efforts. This is doubly important in that his wife is his editor. Dan Baum is a person, and also a mini-brand for him and Margaret. My wife’s in IT; if I have a rough month, we still eat. I mentioned what I was up to in writing From Jars to the Stars essentially on spec and he shook his head said, “Bad idea.”

Baum was right – From Jars to the Stars didn’t sell wildly, cost me thousands of hours at what worked out to sub-minimum-wage pay, and lord knows what opportunity cost. I could’ve written two or three different books by now had I started with a moderate commercial success.

But I also could have written zero books, and given that I’ve got two young girls for whom I’m the primary caregiver, plus paying freelance work that beckons, that’s the more likely scenario.

So even if it was a bad idea, I’m glad I did it. My wife and I get by just fine. I learned a lot. I answered the question that stalks all decent writers – am I capable of writing a book? It’s an energizing experience, somehow, despite it being so exhausting.  Honors like being nominated for a Colorado Book Award, not to mention winning one, have opened up opportunities like getting up here and talking to folks like you – opportunities that don’t come often in this life. And I thank you for it.