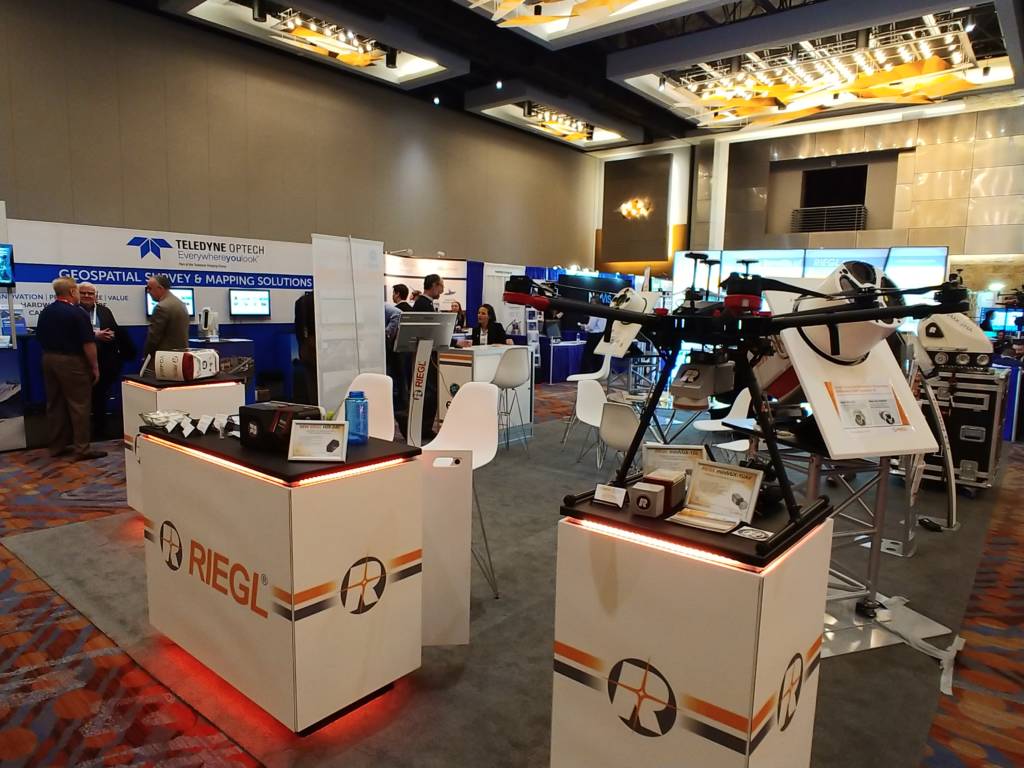 I’m at the International Lidar Mapping Forum in Denver for the third-straight year. The first year, I came to get some sense of the lidar landscape for a book project I was thinking about proposing. That experience distilled into the opener for “The Laser That’s Changing the World,” which came out this past October. The second year, I was on deadline for the manuscript, but swung through again just because… well, I felt like it would be a mistake not to. Perhaps something had changed? That experience turned into pp. 152-158 in the book, and provided a lovely transition into the story of the U.S. Geological Survey’s quest to lidar-map the continental United States.

This year, the folks at Diversified Communications were kind enough to provide the booth in which I sit now as day two of the conference winds down. I write this because Alastair Jenkins told me a story that should have been in the book.

Alastair is in the book – he provided the impetus for Xcel Energy (and, prior to Xcel, other utilities’ use of lidar) in vegetation management. I wrote the vegetation management stuff quite late in the game, within a few weeks of a March 15, 2018 deadline I would miss by six weeks (Prometheus Books was kind enough to extend). If you don’t know vegetation management, well, PG&E, the major California utility, is declaring bankruptcy because of a lack of it. Vegetation management keeps power lines and trees away from each other. When they consort, bad things happen – including, for example, the incineration of the town of Paradise, Calif., and the killing of 86 people, and the bankruptcy of PG&E.

I didn’t have time to track Alastair down, in short. But he walked by my booth (#924; swing by if you happen to be here) and I noted his name tag. I said, “Alastair, you’re in my book.” He stopped to chat. He’d read it, which was cool. It’s nice to be read. Is it right? I asked if I’d gotten his bit right.

“Well, there may be a bit of revisionist history…”

What I got wrong was leaving the impression that Xcel Energy was the first to use lidar in vegetation management. I don’t actually say that in the book, fortunately, but given that most of the book focuses on firsts, the deeper discourse in Xcel’s work could easily have led to that impression. He told me U.S. utilities such as PPL Electric and Arizona Public Service had previously worked with lidar in vegetation management, the 2003 Northeast Blackout having been a big motivator.

Then he told me the story that, were this journalism, I would have led with. Alastair was involved in what was in all likelihood the very first use of a mobile mapper of the sort the Google and Here and Apple and other street mappers have made ubiquitous. I mention this in the book, too, but I mention it in a footnote. Again, I came across this very late, and the fact that this was a one-off thing made it hard to fit in the flow of mobile mapping as a developing industry. Here’s the story:

Alastair, now president and CEO of Aethon Technologies, was then heading up something called Mosaic Mapping. An engineering firm charged with improving the country’s ring road hired Mosaic Mapping, which was then supported by the Canadian military (Alastair, born in Britain, has lived in Canada for decades) given obvious secruity concerns. Laser-mapping the section of road from Kabul to Herat (my footnote, based on a magazine story I came across, has it as Kabul to Kandahar). This road was once paved but now an often bombed out, pitted mess. This was in 2003.

Alastair’s plan was to fly a Riegl lidar in a helicopter along the road. Problem solved. Not a great idea, his military colleagues told him. In the Afghan countryside, helicopters are associated with herbicide-spraying on poppies – the opium-producing cash crop. You’ll get shot at, the military told him. So for plan B, Alastair and colleagues proposed mounting this Riegl lidar, one designed in Horn, Austria to fly in an aircraft, on a 20-foot pole to be mounted in the back of a pickup truck. The tested it in a pickup trolling about the streets of Ottawa, got it to work, and then headed for Kabul (a new 20-foot pole they would procure there).

This was a couple of years before anyone else had attempted mobile mapping, mind you. And despite the war-zone milieu, it was going great despite all the rocking and bumping – until the pole snapped at its base and the lidar crashed down behind the moving truck and dragged perhaps 50 yards until the team had realized what had happened. You’d think that would be it.

But the lidar was still working – it was a bit off kilter, maybe, but predictably so. They fixed the pole and finished the job and made a bit of lidar history that got too-short shrift in “The Laser That’s Changing the World.” Alastair has, understandably, gone with Riegl lidar ever since, he says.