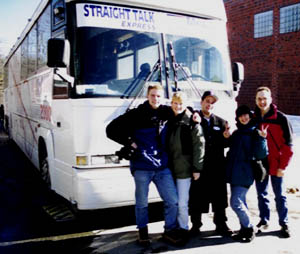 With the New Hampshire primary happening today, I figured it’s time to dust off some of the only presidential political reporting I’ve ever done (I covered George W. Bush’s visit to the National Renewable Energy Lab in Golden, Colo., also).

It occurred 16 years ago, before I wrote for a living. I was in grad school at the Fletcher School of Law and Diplomacy at Tufts University at the time, and had co-founded a digital student rag we called The Fletcher Ledger. It’s gone now; fletcherledger.com’s lead article, a placeholder, today reads: Hvordan at rydde plads på iPhone – Instant Svar.

It’s mostly a humor piece, but we did catch Steve Forbes, John McCain, Bill Bradley, and George W. Bush. The wrap-up’s kind of eerie. I didn’t have a digital camera at the time — shot film with a Nikon F7, then scanned and shrank them to dial-up-friendly size for posting with Microsoft Front Page 1998. I link here to capture it in its fully formatted glory.