As a writer with limited Photoshop skills and very limited video-editing skills, I’m tend to be in awe of good video. Since I left the Daily Camera in 2007, though, I haven’t  had a chance to compare a story of mine with the video equivalent. Back then, it was always TV news people who happened to be covering something up in Boulder — predictable, quick-hit stuff. This one’s different.

Michael Mazzanti, the multimedia guru for the University of Colorado Health system, put together the above about Shaun McCabe, on whom surgeons performed Colorado’s first double-lung-liver transplant in March. He sent a link out to a few of us a couple of days ago. I freelance write for the same system, and covered the story when they opened the doors to the press on March 16. My story ran in an internal biweekly called UCH Insider shortly afterward. 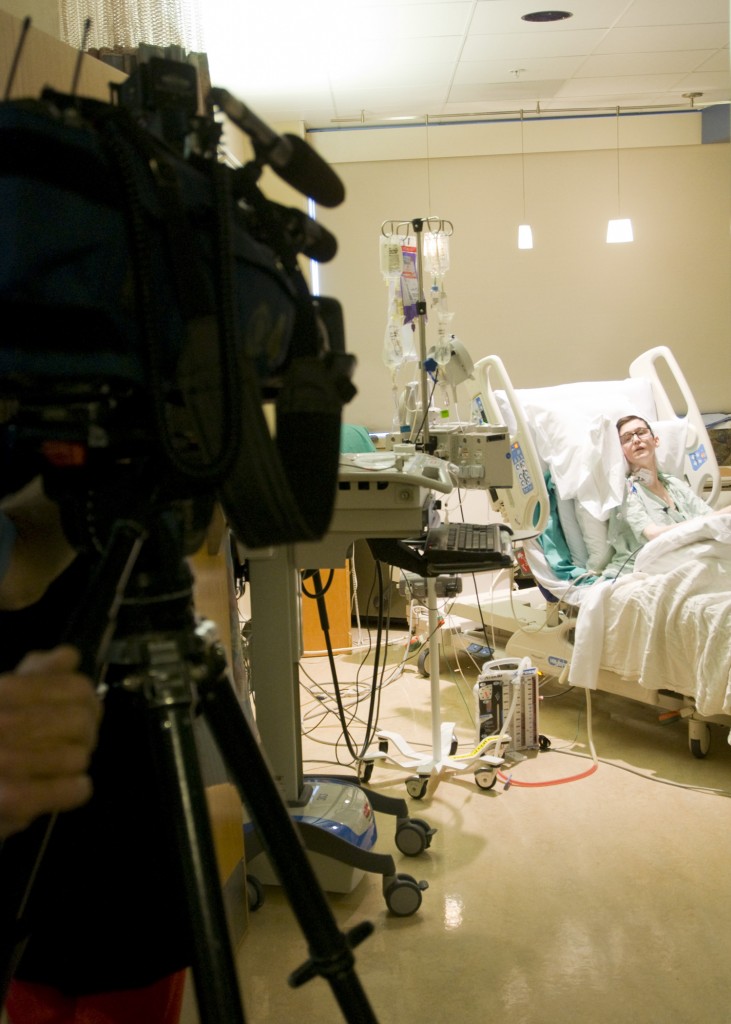 A shot I took of Shaun McCabe on March 16 at University of Colorado Hospital.

I watched Mike’s video and was impressed to the point that I sent him a note back asking how long it had taken him and what he used. Premiere, he said, with the captions in After Effects. Took him a few days to edit.

My initial impression was that video kicks print’s ass. My story has more depth, but the video’s impact is on a different plane.

Then I thought about it. The TV folks did breaking news stories, too. CBS4’s version pales in comparison to Mike’s product. But then, Kathy Walsh, an excellent television journalist, only had a couple of hours to put her piece together. Time is really the essential difference.

I spent probably 3-4 hours writing the piece, including the review of my notes and rooting around on the Web for additional background. If I’d have had a few days for it, the product would have been different. But in what ways?

Whereas Mike used the time to select striking cuts, distill the messages he wanted to convey, and create and place the dynamic captions, a writer would have used the luxury of time to make the story longer. I’d add  sources, do follow-up interviews, gather background on the history of transplants, provide a more 360-degree view of the key players — the surgeons, the mom, the siblings, McCabe himself. The relationship of reporting to article length would not grow linearly — more input lets the writer pick from a stronger roster of quotes and imagery. The story becomes less of an assemblage of whomever happened to show up and more of an all-star team of inputs. The added reporting, assuming some of it is on-scene, also boosts the odds that the reporter sees, hears, touches or smells something firsthand that adds immediacy and poignancy to a piece. But would it have been a better product than Mike distilled into two minutes? That I can’t say.