HomeMedia"\"Adrian Peterson, thank you for the valuable...

Adrian Peterson, thank you for the valuable insight 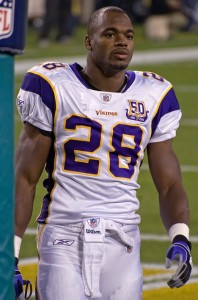 While I’m in no position to evaluate Minnesota Vikings all-pro running back Adrian Peterson’s legal situation, his linguistic situation is noteworthy.

From an ESPN wire story on a second child-abuse allegation:

The reported text exchange was as follows, according to KHOU-TV:

Mother: “What happened to his head?”

Peterson: “Hit his head on the Carseat.”

Mother: “How does that happen, he got a whoopin in the car.”

Peterson: “I felt so bad. But he did it his self.”

According to the report, Peterson then goes on to say he was disciplining his son for cursing at a sibling, though how specifically the child was wounded wasn’t made clear.

Mother: “What did you hit him with?”

Peter never directly answered, the report said, but later replied: “Be still n take ya whooping he would have saved the scare (scar). He aight (all right).”

So that’s Peterson’s conversational style. Contrast this with his usage in a statement relating to the now infamous switch-whooping-on-a-four-year-old:

Peterson has faced heavy criticism for his use of a so-called switch to discipline the other son, but the running back said in his statement that he “never imagined being in a position where the world is judging my parenting skills or calling me a child abuser because of the discipline I administered to my son.”

It’s almost as if it were written by an entirely different person, possibly one with an expensive legal education. We can all take something from this, though.

If someone who is 6’1″, 217 lbs and comprised almost entirely of fast-twitch muscle — someone who can run the 40 in 4.4 seconds, bench press 345 pounds and squat 540 pounds, someone with a 38-inch vertical leap, someone with a Wonderlic score of 16 (placing him somewhere between a security guard and a warehouseman) — says to you “be still n take ya whooping,” he actually means, “remain motionless as I administer discipline upon your person.”

This is of particular use to four-your-old boys of Adrian Peterson’s issue.

For this valuable insight, we can thank Adrian Peterson.