Walking off a short jog yesterday with an old friend from Canton, Ohio who lives in Sydney and has kids with strong accents, I came across a man flying a drone over a house around the corner.

“Louie, sorry man, I’ve got to talk to this guy,” I told my friend.

Louie has known me for 25 years and figured he might as well go along for the ride.

The guy turned out to be Martin Yeager, of R/E Studio Works. He was working — taking aerials of a house at Trenton Street and Ninth Avenue in Denver that’s about to go on the market. He was using a DJI Phantom 2 Vision GPS Drone to do it. This is a large white insect with four rotors and a 14 megapixel camera. Up close, it sounded a bit like a stereophonic weed whacker.

Martin was facile with the avionics controls, which looked like standard remote-control aircraft fare. The controls for the video fed through his iPhone, which was mounted to the remote control.

I’m not a huge gadgeteer. I have no use for such a thing. But man do I want one.

There was a gusty wind; the machine didn’t seem to notice it, hovering with freakish steadiness as it climbed for context of the house’s plot, then down for some yard shots.

“You’d need a helluva ladder to get that otherwise,” I said. 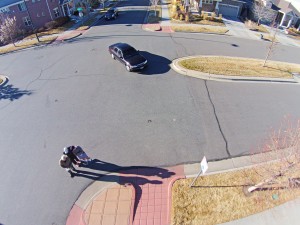 He explained that, should he drop the controls in a pond, the thing will GPS remote itself back to where it took off. He said you can barely hear it at 300  feet — it tops out at about 400 feet, he said — you can’t hear it. Have you flown it that high? I asked.

Sure, he said. I was just over at Sports Authority Field at Mile High. I send him an email as we talked and asked for the link to the video.

Martin showed up at the stadium and told security he had a drone and wanted to take some aerial footage. Uh, whoa, hold up, they said. They talked to a manager, who referred him to the general manager. Martin thought he’d get a gatekeeper’s stiff arm. But the stadium’s general manager said, in effect “You’ve got a drone? Sweet! We usually have to hire helicopters.”

And so we get the video above, and a short life lesson: If you’re going for a walk in the neighborhood and come across someone flying a drone, be sure to stop to say hello.