Amid my sixth and most foolish soccer career at age 44 (indoor, over-30 coed, more challenging than it sounds), I’ve pounded my feet into plantar fasciitis twice now, joining Antonio Gates, Ty Lawson and untold legions of middle-agers (not to be confused with medieval individuals) limping around. By the second time I knew a lot more about PF. Bottom line is, it’s going to totally heal at its own pace, by and large, but you can sharply speed the pace of healing and return to action faster/with discomfort rather than knifing pain by doing a few things. 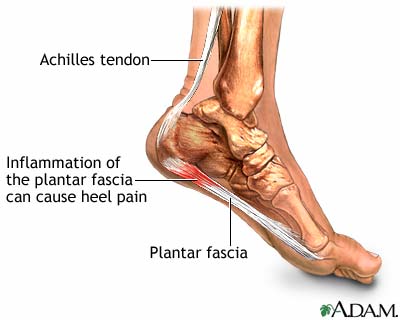 If you can actually see into your foot like this, you should seek expert medical attention.

1) First, my sense is that a lot of plantar fasciitis has nothing to do with pronation/genetic arch deficiencies/obesity etc., but rather exceptional foot pounding via poor shoes or just hard play on a non-soft surface. Age heightens susceptibility, clearly. But it’s essentially an impact injury for most of us. So pick up some gel heel cups. I have ones I bought in the checkout aisle at Dick’s Sporting Goods, which have a somewhat taller back lip so they don’t move (I use these playing soccer and I have a pair in my running shoes). Dr. Scholls has offerings at every drugstore.

2) The Foot Wheel is a good thing to have under your desk – boosts blood flow and actually makes for the best foot massager you’ll ever own also. (The same company also makes The Stick, which has quietly become recovery mainstay among runners  and even the Colorado Mammoth pro lacrosse team, in whose trainer bags I spotted a bunch as they practiced recently at our indoor soccer arena).

3) I have a night splint I wear after some soccer games if there’s particular pain, and I wore it often in the early phases of injury. Often take it off by about 2 a.m., but it seems that the early-sleep stretching is sufficient  to erase morning pain.

4) I stretch both calves before I take a step in the morning (arms on bed, feet on floor). This isn’t necessary, by the way, if you sleep with the night splint on.

5) I bought these velcro-loop arch supports and use on the PF foot, currently the left, when I run or play soccer.

6) I picked up these non-soft quasi arch supports from Heel That Pain and had them in my work/walking shoes for a while, and they did seem to help by essentially shifting the pressure point of your step to a spot a bit in front of the heel. Despite Jason Kidd and John Starks having apparently played pro basketball in them, I’d advise against running in these — I mildly sprained the opposite foot (had both in for symmetry) because of the way they changed pressure distribution.

7) Finally, and I highly recommend spending nine minutes with this video – of myofascial release massage. This is a really good explanation/approach among a whole bunch of noise out there. I lotion the bottom of the foot and use my index knuckle, pressing harder than Dr. Richard Perez of Alamo Family Foot Care demonstrates. Talking to people who have done actual massage therapy with actual masseuses/physical therapists, the pros work it until it hurts. That’s because the plantar fascia is a beast of a tendon to influence. But you knew that already.