Holmes’s attorneys had agreed to a plea deal in which he would spend life in prison without the possibility of parole.

Life without parole essentially ends your life from any practical perspective. No sandy beaches, no mountain hikes, no productive career, no kids, no grandchildren. An hour outside a day. You get to breathe, eat and drink, but you’re basically dead, and society is safe with you behind bars. 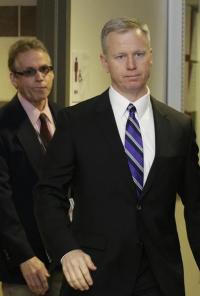 The death penalty literally ends your life, of course. But in this case it drags the details of the case out for the world to see, opening old wounds, delaying the healing process, costing a fortune (the judge who has had the case thus far has dismissed himself, citing a lack of time), making us all look barbaric and stupid in the eyes of Europe and beyond. The only ones who benefit are prosecutors such as Brauchler, who can advance their careers by bragging about ending the Aurora Theater shooter, and the media, who will have an ongoing, sordid story to relay at the top of the hour/on their front pages.

Brauchler’s decision is selfish, damaging and wasteful. The chimp in us all wants to see Holmes drawn and quartered, burned at the stake, shot up like a clay pigeon. But we should be smart enough to see the equivalence of a life term and a death sentence and choose the former.