HomeRandomUSMNT – No excuse for bad D

USMNT – No excuse for bad D

I watched a bit of the U.S.-Honduras soccer game of Wednesday night — the first of several World Cup qualifiers in the “hexagonal round” (how about “round of six,” for clarity’s sake, FIFA?).

The U.S. Men’s National Team (USMNT, not to be confused with POTUS or SCOTUS) lost 2-1 to a country with one-fortieth of the population. 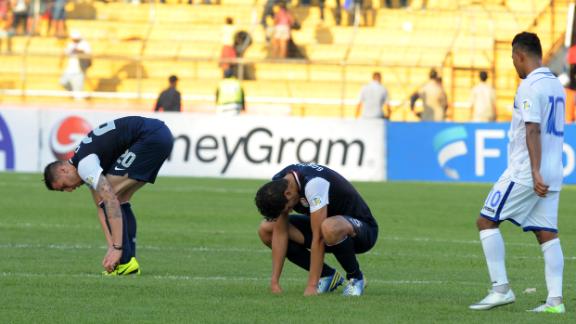 Unless the USMNT focuses on defense, this image will have many future cousins.

Granted Honduras’s football, baseball and basketball teams are abysmal (not to speak of their hockey team). The best athletes in Central America all play soccer. And granted it only takes 11 brilliant players to win soccer games. Plus Honduras is a bitch to play in. But c’mon, there’s no excuse.

I don’t mind the lack of American offensive brilliance, really. Players like Lionel Messi, Cesc Fabergas, Christiano Ronaldo, Mesut Ozil, Neymar, Wayne Rooney, Zlatan Ibrahimovic, Juan Mata and other creative/goal-scoring geniuses are born as much as bred. The American side has some solid talent up front anyway — Clint Dempsey is a world-class attacker, for one. What flummoxes me is the threadbare defense.

The U.S. back line and defensive midfield made Honduras look like Brazil.

Granted, the Americans haven’t played together much  (the right back and one of the center backs had never been on the field together before the Honduras game, apparently). But defense is largely about physical prowess, positioning, and tactics. There is no reason why, from a strictly defensive perspective, the USMNT shouldn’t be among the best in the world. Sure, you want your outside backs to land pinpoint crosses from 50 yards, ideally. But I’d settle for shutdown cornerbacking, to borrow a term from a different sort of football, and mundane distribution.

If American soccer players lack world-class skill, fine. Why not rely on what we’ve got in abundance instead, which is raw physicality and the brains to be in the right place at the right time?