Monster in the drink 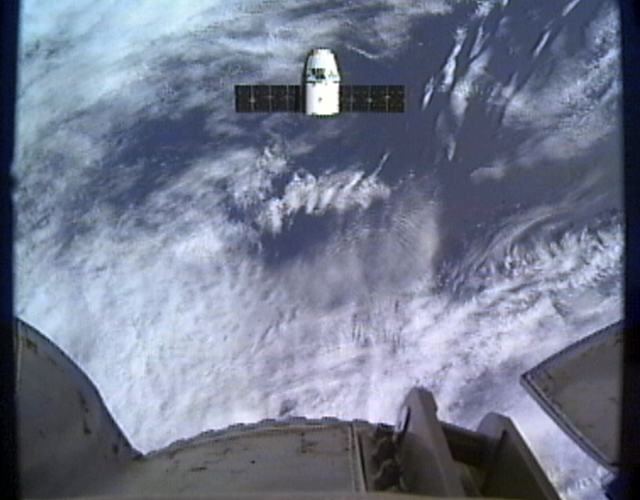 A video grab of the Dragon capsule approaching the International Space Station on Oct. 10. The capsule splashed down off the California coast on Sunday, Oct. 28, 2012. (Courtesy NASA/SpaceX)

As I write this, SpaceX’s Dragon space capsule is on a boat, having splashed down 250 miles off the California coast on Sunday. Monsters loom off both coasts, then: Frankenstorm to the east, Dragon to the west.

The Dragon capsule splashed down with 1,673 pounds of International Space Station stuff, including the first scientific cargo to come home since the space shuttle program ended in July 2011. Sending home scientific experiments isn’t trivial: the ISS is a national laboratory, remember.

Private companies have been critical to NASA since the very beginning, so I don’t feel that singling out SpaceX for its being a private company doing “commercial space” is all that meaningful. The space shuttle was created by contractors. What’s amazing to me, though is that SpaceX built the rocket and the capsule and got it all to work more or less flawlessly with a staff of 1,800 people (Boeing, though they build airplanes, too, employs about 160,000). And while SpaceX does some contracting, a lot of it was done in-house.

Musk talks about his preference for tight teams in his recent Q&A with WIRED editor Chris Anderson. He also talks about his long-term goal of creating a rapidly reusable launch vehicle (that’s aerospeak for rocket) to drive down costs to the point that a Mars mission would be possible and space in general far more accessible. With Musk, the long-term isn’t usually very long. The first I’d heard him on the topic (though probably not the first time he talked about it) was at a University of Colorado event he spoke at with New Horizons Pluto-mission leader Alan Stern in May 2011. I wouldn’t bet against Musk getting it done.