You think it’s hot out there now…

Washington D.C. hit 99 degrees Fahrenheit today; we in Denver have been in that neighborhood a few days already this June, and are headed back this weekend. The average June high is here supposed to be 83. We’ve had roughly zero precip; the potted plants wilt within a hours of a soaking.

So let’s say we’re 10 degrees hotter than normal, to be charitable. That’s 5.5  degrees Celsius, which is not far off from 4 degrees Celsius (1.5 degrees, roughly), about which David Roberts, the ueberprolific Grist blogger and Twitterhound, devoted a bit of his recent TEDx talk. He posted annotated slides here, from which I post the following: 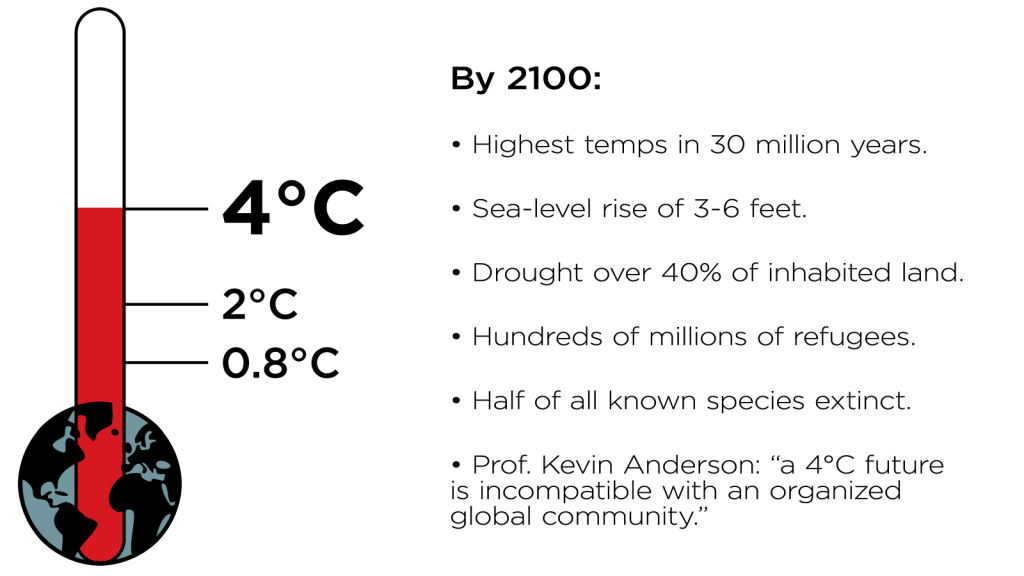 I don’t know about you, but when it gets over about 90 degrees, the flight instinct kicks in. Roberts is only the messenger, here. This isn’t alarmism, but rather a function of very well-understood physics–and probably conservative, given that we don’t know what kinds of amplifying feedback (mass release of carbon/methane from melting permafrost, say) will kick in, and we’re trending toward ever-higher greenhouse-gas emissions. It’s very difficult to imagine dampening feedback, at least when you’re not talking geologic time. This isn’t an election issue, for some reason, but it isn’t going away, either.