Given the play of the Waldo Canyon (Colorado Springs), High Park (Fort Collins) and Boulder (Flatirons) wildfires, I’m getting notes and calls from folks worried that flames are approaching our home in east Denver, 20 miles from the nearest lodgepole pine.

These fires are devastating in terms of property damage (500+ homes lost) and lives (I think three) lost. But they’re relatively tiny in scale. 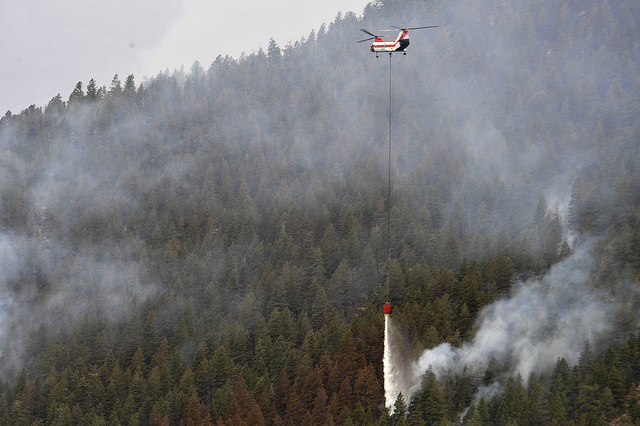 The elevation creeps above the famed mile-high mark east of town, so I can see a swath of mountains from a Westerly Creek dam I run on. Yesterday I could make out wisps of smoke from the Flatirons fire north of us; nothing but strange cloud formations from Colorado Springs; Fort Collins is out of view from here.

Fires in the multi-thousand-acres, like the Overland Fire in Boulder I covered a few years back, look like outsize bonfires from a distance, with leaning chimneys of smoke that seem to turn into clouds. Up close, of course, they’re fearsome.

The total burn of the High Park, Waldo Canyon and Flatirons fires is about 102,000 acres so far, or 160 square miles. Colorado’s a 66-million-acre state. So we’re talking 0.15 percent of the land area, which would be equivalent to a nine square yards of a football field — a box three yards on each side. This isn’t to diminish the heroic work of firefighters or the tremendous losses families are suffering. But these are mostly local events, like tornado hits.

If you’re interested in understanding some of the deeper economic and social questions these and other wildfires raise, do check out the I-News network’s in-depth pieces in its “Red Zone” series.