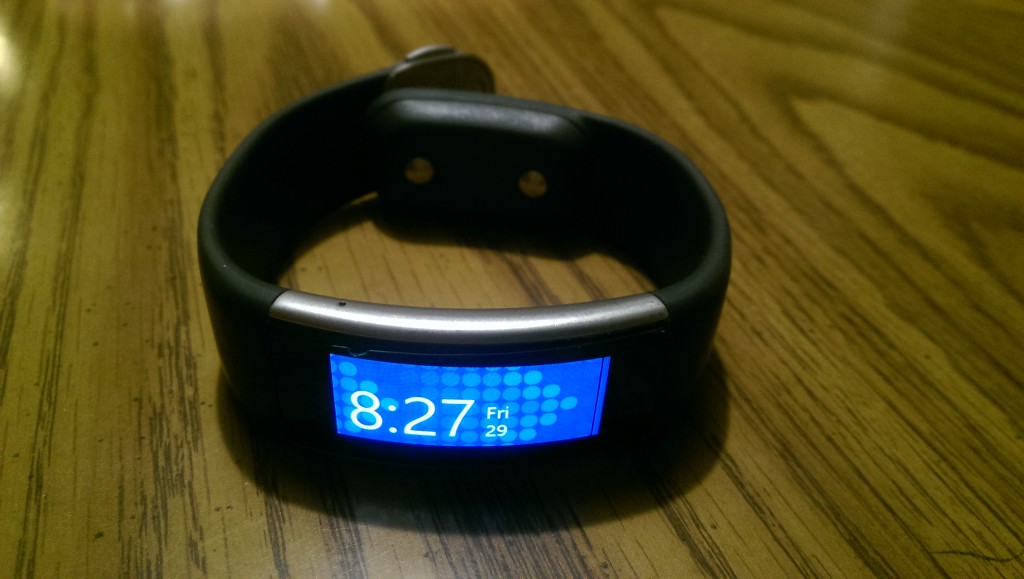 I bought  Microsoft Band 2 a few weeks back ($200). I’d looked at the Band 1 a year ago and was a bit scared off by its extreme flatness; the Band 2 has a nice arch. I jumped on it.

This post is about heart rate monitoring accuracy, but before I go on, the Band 2 is quite a remarkable bit of technology. Comfortable enough to sleep in, not too large, clasp as magnificent (if less neck-saving) as my Shimano mountain-biking clips, vibrates with incoming phone calls and texts before my phone hints at intrusion, sleep tracking is pretty cool, the app and Web interfaces are deep and interesting… in all hard to complain. I’ve read a bunch of reviews and all the reviewers, doing their jobs, did find fault. But ultimately the good vastly outweighs the shaky. (The most shaky seems to be the UV sensor, whose utility I question anyway. But I live in Denver, where one doesn’t need a UV sensor to tell one to sunscreen up between dawn and dusk.)

So, the heart rate monitor. It works quite well. But it’s not as accurate as a chest strap. I have data as well as anecdotal evidence for this.

I went on a run around Denver’s Stapleton neighborhood Three nights ago, more or less a 10K as my daughter kicked around at the Bladium. I wore the Band on myleft wrist, a Polar FT7 on my right (plus chest strap, obviously), and to add a bit of spice turned on GPS and Endomondo on the HTC ONE phone.

The Polar has just weight and heart rate.

Endomondo has just weight and GPS.

Here’s what we got.

Band (from the lovely Web interface): 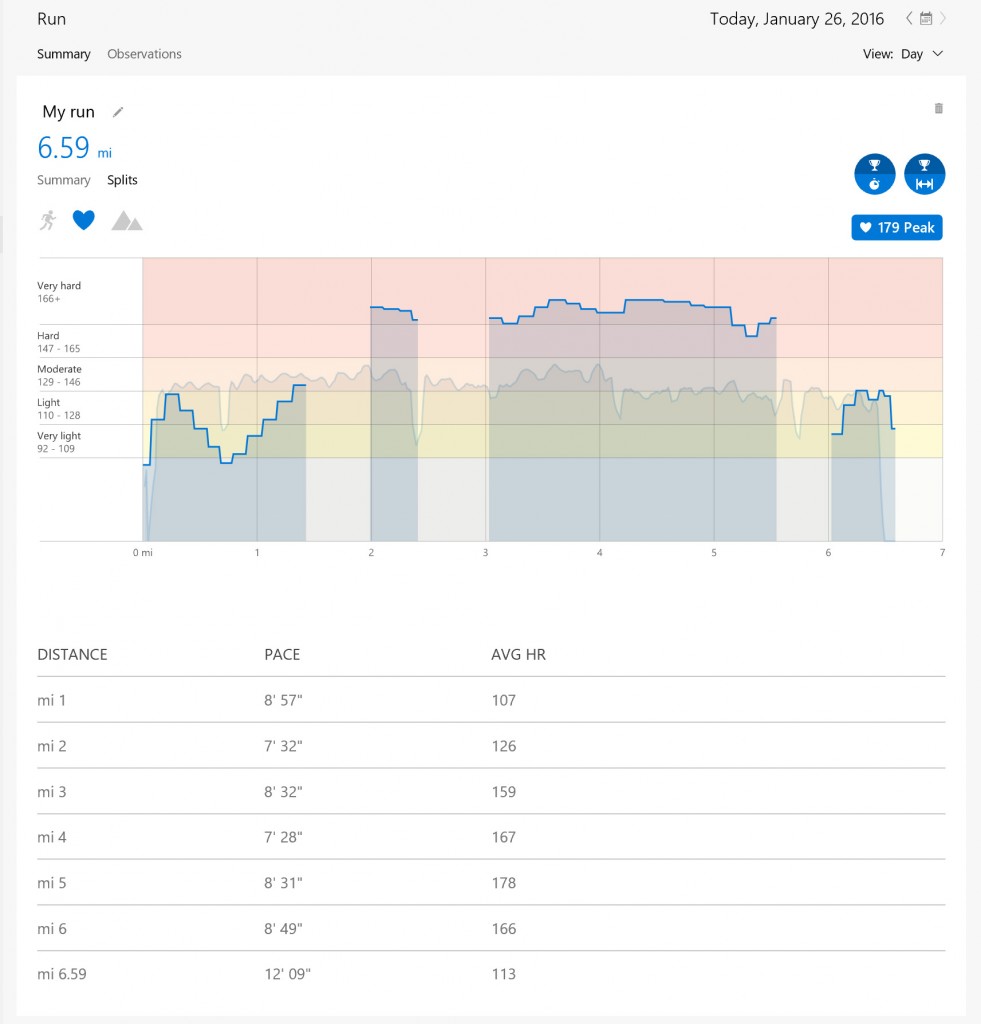 From the Microsoft Health dashboard

There are a couple of things to note. First is that during mile 2, at a 7’32” pace, I wasn’t probably averaging 126 beats per minute. If you look at the graph you can understand why. The Band, probably a bit loose (user error, OK), went out of contact/got unreadable. I was well over 160, maybe into the 170s during much of it. During mile 3, we cut out for a good while, though the heart rate estimate of 159 for the split is probably not too far off, though elevated because I’d killed myself in mile 2 and was on the high end coming into 3. Mile 6 is also quite perplexing, as I was pretty tired, but at an 8’49” pace probably not running quite 166 bpm hot. But maybe.

The Band said my average heart rate was 156 bpm and that I burned 794 calories.

Now for Endomondo on the phone: 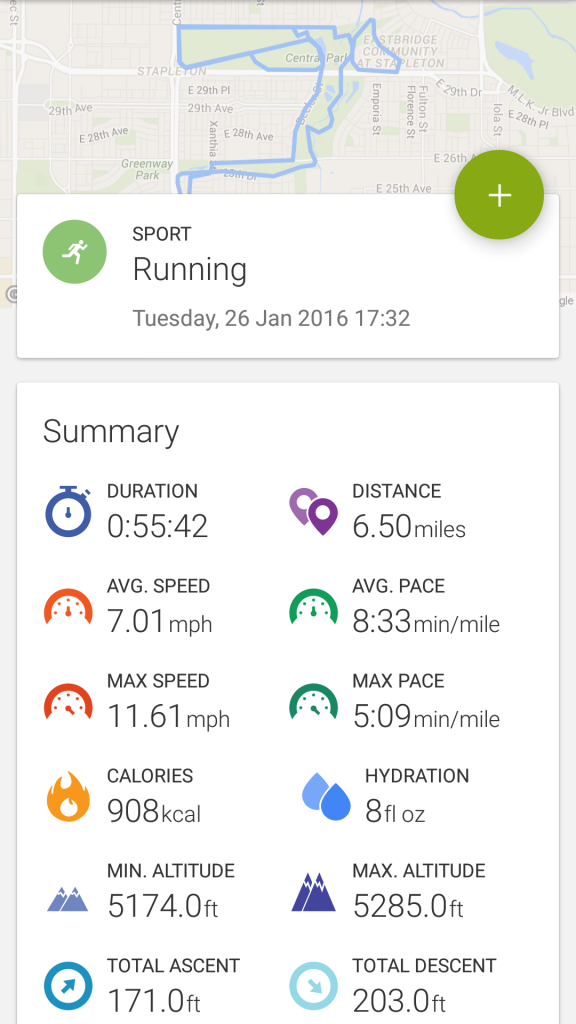 Endomondo, using GPS and how much meat I schlep around our fair planet as inputs, pegged my calorie count higher (908). I started Endomondo slightly later than the Band and the Polar, hence the time and distance discrepancy. How it came up with a 5:09 max pace I don’t know, because I don’t recall having fallen down the stairs, which is the only time I achieve such velocity without some sort of mechanical assistance.

And finally, the Polar, which  knew heart rate and weight: 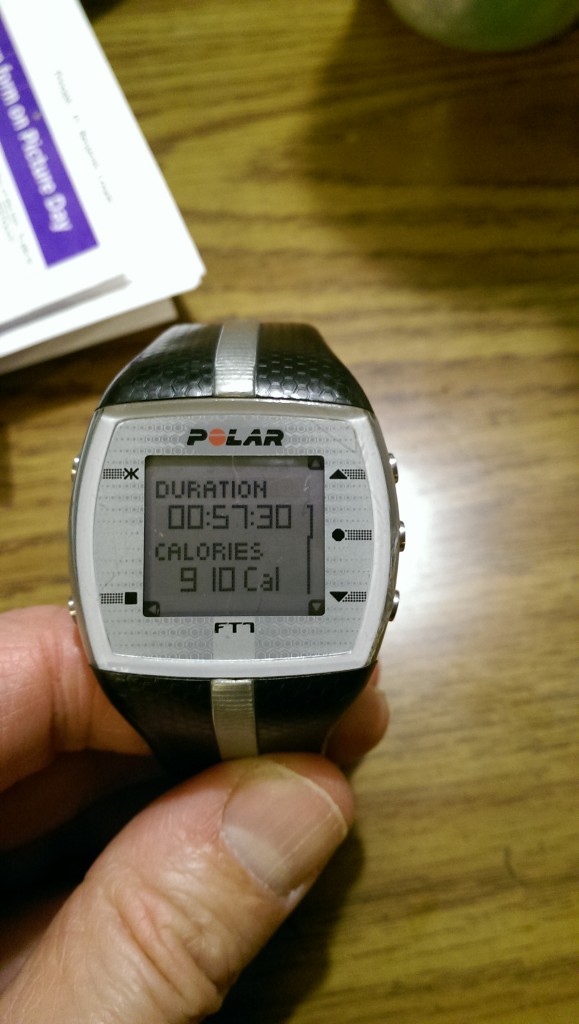 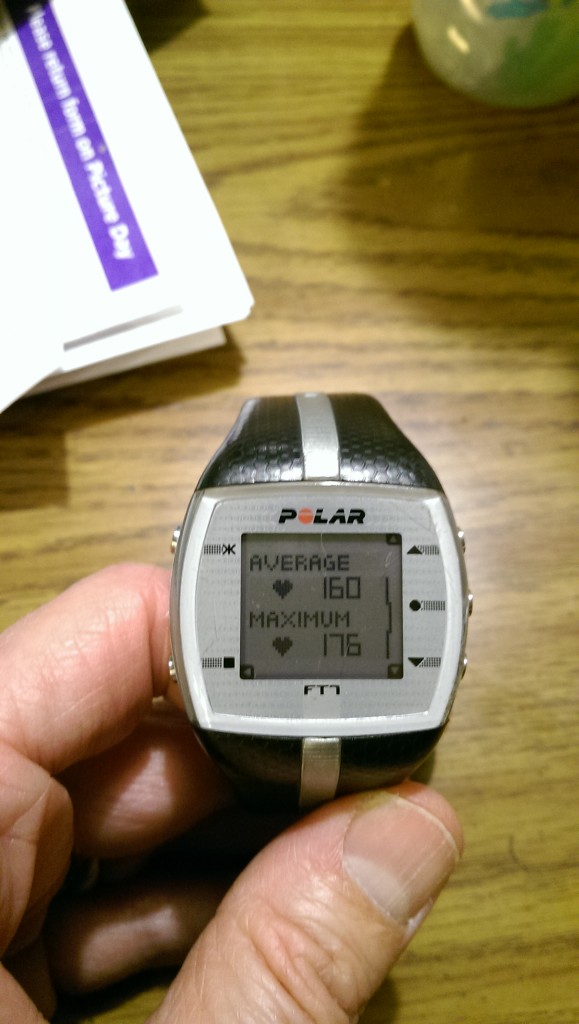 This post requires a lot of scrolling, for which I apologize.

The Polar and the Endomondo jibed as exactly as I’ve ever seen on the estimated calories (typically Endomondo is 5-10 percent more generous).

The Band probably underestimated the calories, largely due to losing contact with the wrist. It came in with a higher max heart rate (180 vs. 176). The average heart rate, according to the band, was 156. Pretty close, the discrepancy probably explained by the dropping out when I was running hot during mile two.

So here, the band looks pretty good, as long as one tightens it properly around one’s wrist.

But then a run today gave me pause. This was a slower-paced thing, with but one with a twist: at mile 4.6, roughly, I stopped at the westerly field-turf soccer field at the Lowry Sports Complex and did five sets of sprints (I play indoor soccer; call it training) — suicides, six yards and back, 18 yards and back, 32 yards and back. So 112 stop-start yards, times five. I didn’t wear the Polar and left my phone at home. From Microsoft Health: 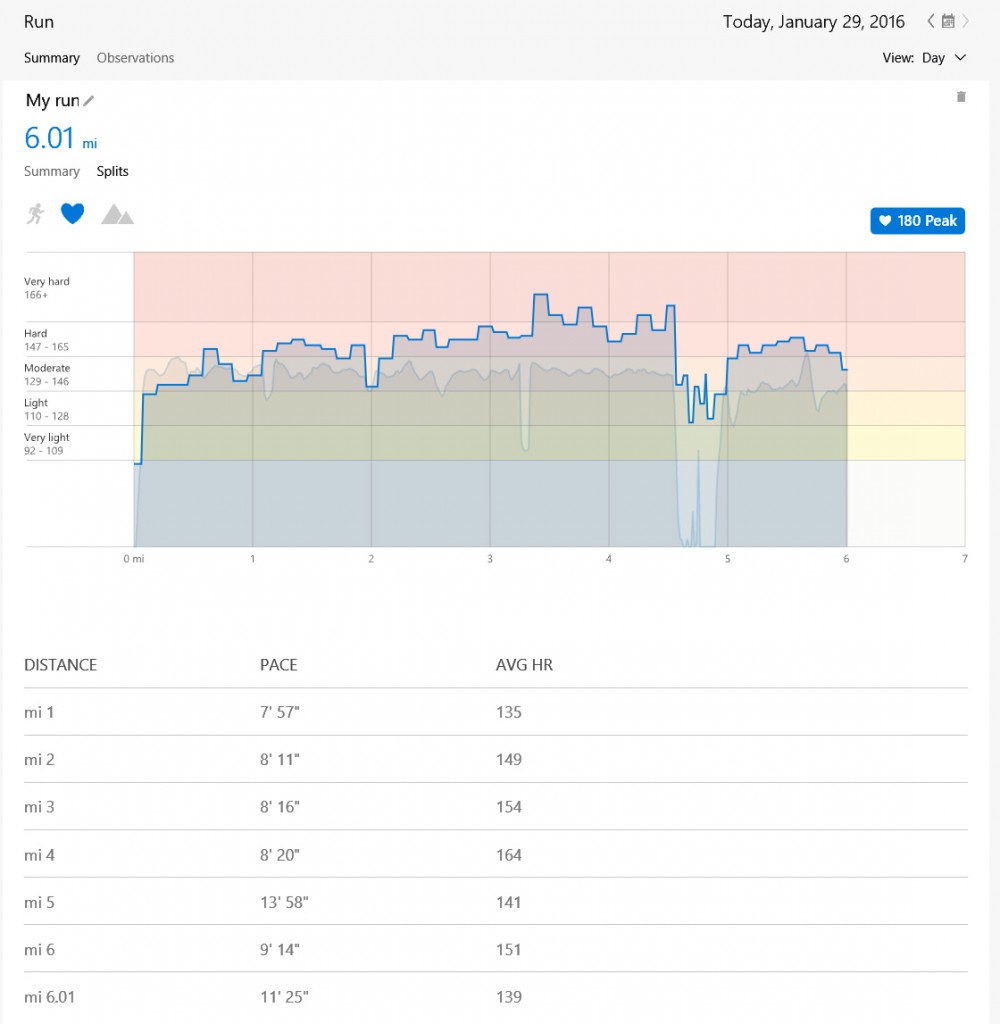 The striking bit is at about mile 4.6. Here we have complete connectivity on the wrist but strange numbers. While working far harder than the entire previous four-plus miles, my heart rate supposedly dropped 50-ish beats per minute. Between sets, gasping for mile-high air, it was telling me I was at like 135 bpm. Having worn the Polar on these runs, I would guess I was in the low to mid-170s. Perhaps the Band 2 gets in a groove, or is programmed to assume that this particular heart-rate pattern was too strange to take seriously. But something was clearly going wrong.

Why do I bother sharing this? Subjecting you so much tedious scrolling? I think the Microsoft Band 2 is a really cool product, and do recommend it if you’re looking for a fitness band/almost non-Apple Watch. And the heart-rate monitor is a cool thing and works pretty well (when I’m not exercising and check out of curiosity, it’s always plausible). But there appear to be limits to how accurate this particular LED-based technology can get. The wrist is a good distance from the heart, and is especially subject to the very motions that are the point of exercise. The chest strap’s sensor, in contrast, hangs out like two inches from the myoelectric dynamo itself. With that, the Band just can’t hang.