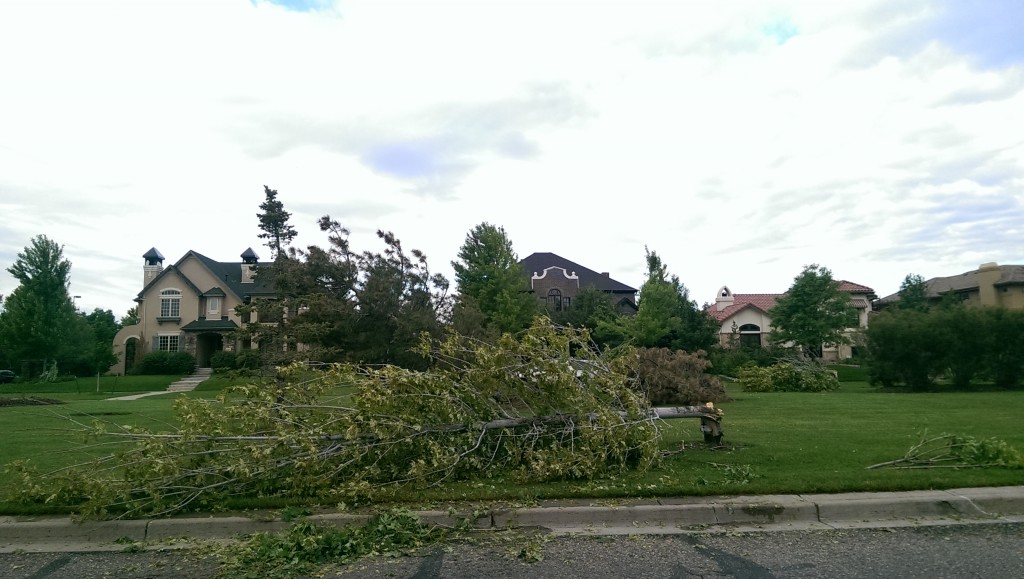 I was going to get up and work on something entirely different, but my dusty Daily Camera reportorial instincts got the better of me and, at about 6:30 a.m., I took to the streets of our east Denver’s Lowry neighborhood to survey the destruction.

There was a reputed tornado, though the National Weather Service remained dubious as of this (6/25) morning. Former reporters with 45 minutes to spare and an easy post-disaster commute (I rode around the 1990 Specialized Hard Rock) can’t resist these sorts of opportunities. So I fed the bullying puggle and  set forth on NewsBike 7773.

I will now post another disaster picture to keep you interested. There are many more, but you’ll have to either read on or, for those in hurry, scroll down. 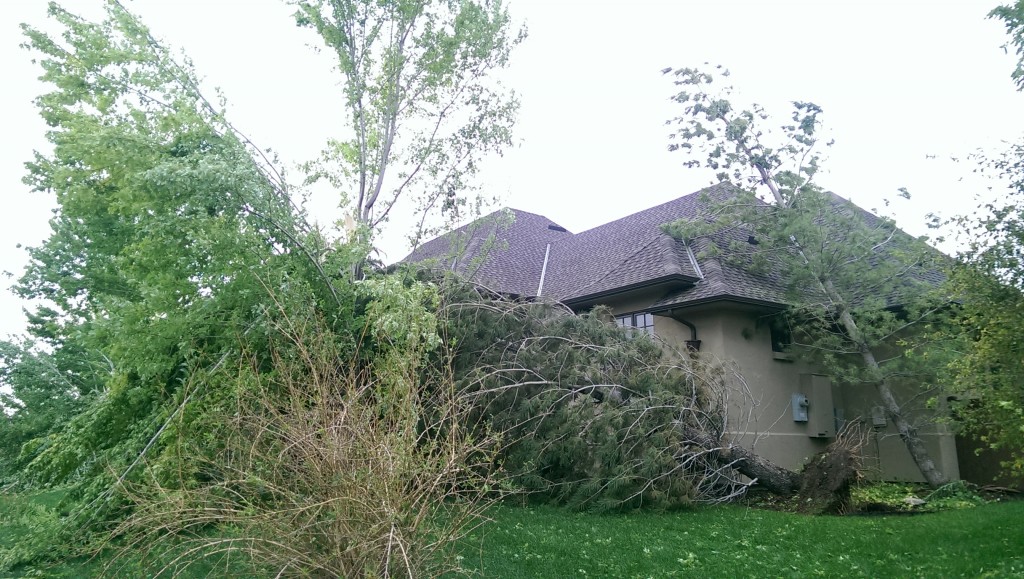 These folks lost about all of their trees.

Now, some background on this storm. First, this was no hurricane, no murderous Oklahoma tornado atomizing a mile-wide swath of civilization. Denver is too close to the mountains for true, wicked-crazy tornados to develop – the storm cells that produce them haven’t quite had the time to get their shit together (a meteorological term. Look it up.).

But we to get some wild T-storms, and as a result I have become something of a NEXRAD addict. If I’m on my PC, Weather Undergound is the go-to; on the phone, it’s RadarNow! (their exclamation point). 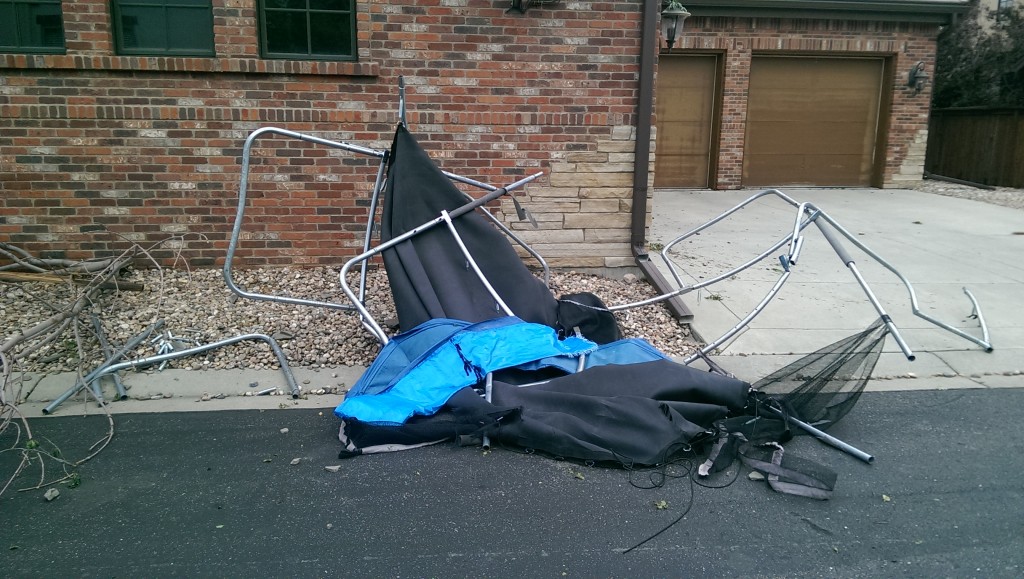 This used to be a trampoline. It was reportedly, for a brief time, on this house’s roof.

I was not on my PC during this one, but rather in the Costco Warehouse on Havana Street, there to buy a new cordless phone set to replace the one toasted in a lightning strike last Friday (garage door opener, sprinkler-timer box, and Obi200 were also killed). I had noted some clouds off to the west and had packed an umbrella.

I had chosen a nice Panasonic number and bought the requisite raspberries, unsalted nuts, Kind bars and a few other items I had not planned on buying (85 percent of Costco revenues stem from unplanned purchases. Look it up.) when my phone rang. It was my wife, in something of a panic. 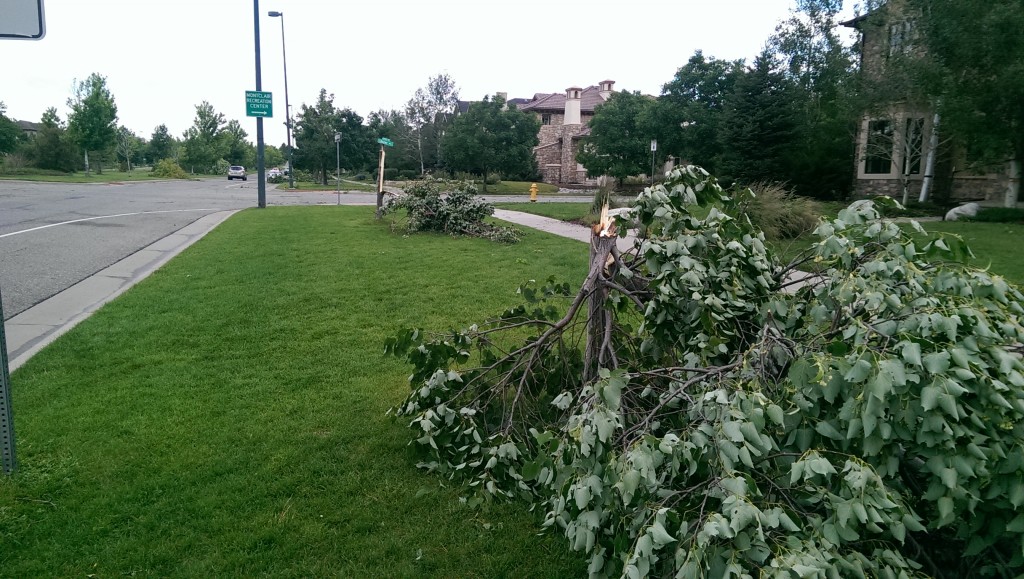 “Have you seen this storm?” she said. She sounded out-of-breath.

No, I said. It’s always sunny, if in a fluorescent way, here in Costco.

She explained that she was out of breath because she’d just run outside to move the 2001 Jetta into the garage, an effort complicated by our garage door opener having been electrocuted last week. The solution involved enlisting our 12-year-old daughter to help Carol open the door. She described rain and hail like in a Weather Channel promo, quarter-sized ice balls hammering the house and shredding leaves and collecting on the patio like malignant snow. 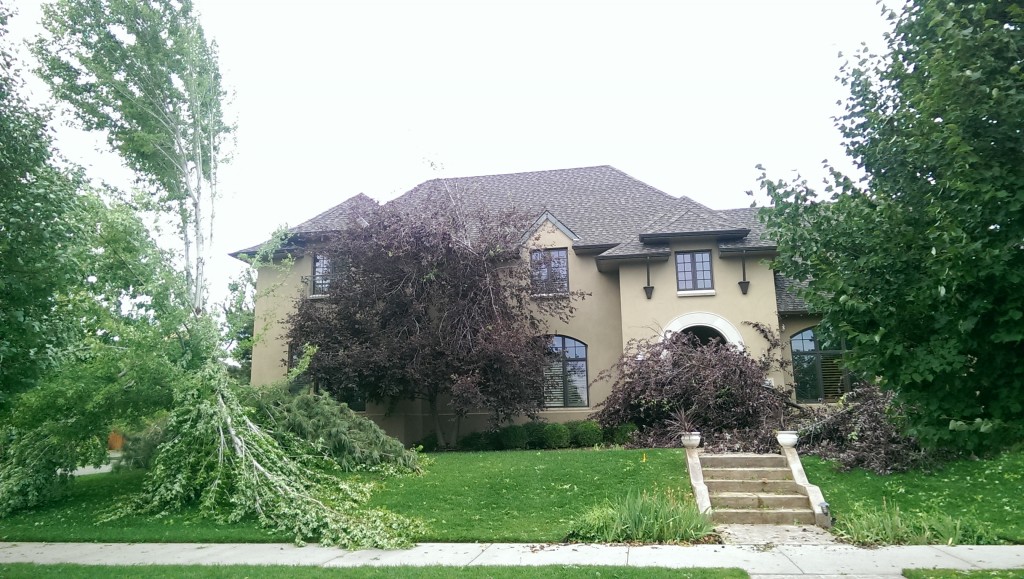 Either that tree really wants in the house or there was a meteorological event.

I pushed my cart to a point I could see outside. Nearly dark, hammering rain – but no hail here, three miles south. I noted a Costco employee moving a garbage can below drips from the metal roof, the sound of rain now audible. 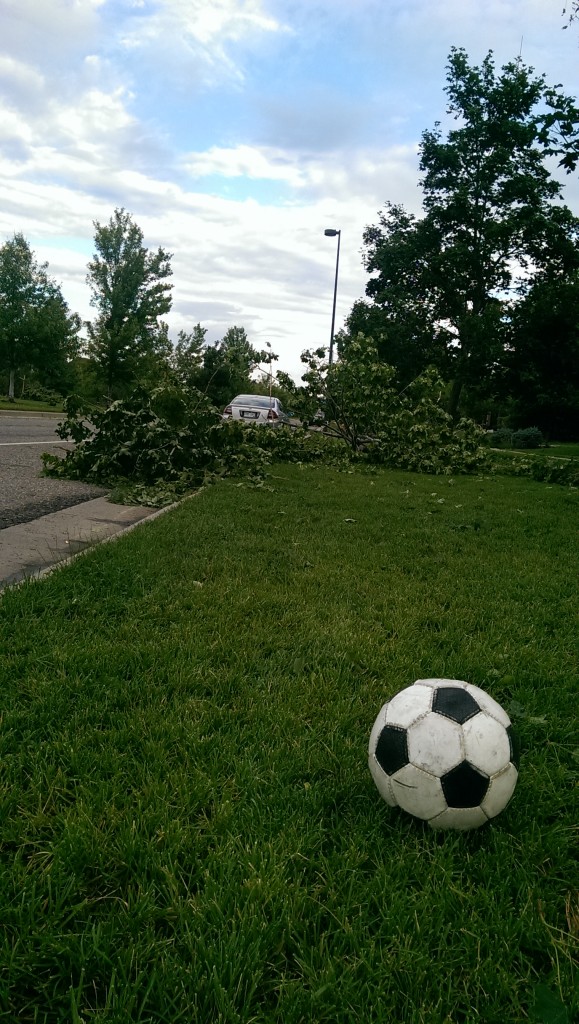 I was hoping for a doll with a severed head, but settled for a soccer ball.

As I settled onto a leather couch near the open-air seafood freezers, it dawned on me that a gigantic erector-set metal box crammed with millions of untethered items (flat-screen TVs would take off like sailplanes) might not be the optimal shelter during a tornado event. I could be impaled by spears of C batteries. Or smothered by swarms of clothing one is never quite sure is fashionably acceptable or not. Or maybe greased-burned by the salty skins of rotisserie chickens. I would have to ensconce myself amid bags of cheese-caramel Chicago Mix popcorn, which could provide a sort of air-bag buffer as well as vital sustenance. 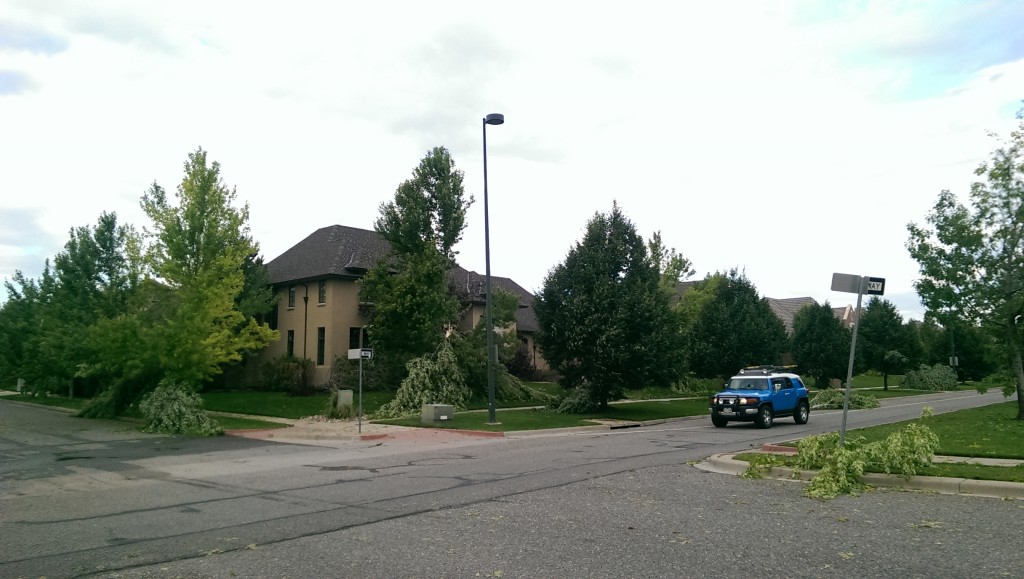 The nicer houses seemed to get the worst of this one in Lowry, I suspect Hillary Clinton and Nancy Pelosi are behind this.

I opened RadarNow! to the biggest, baddest storm I’d ever seen over Denver – a bit of green (rain), a lot of yellow (wind and heavy rain) , a whole lot of red (crazy T-storm) and, in the center, a blob of fuchsia, which meant god knows what. The entire city was draped in anger. The fuchsia pixels looked to be right about where we live. 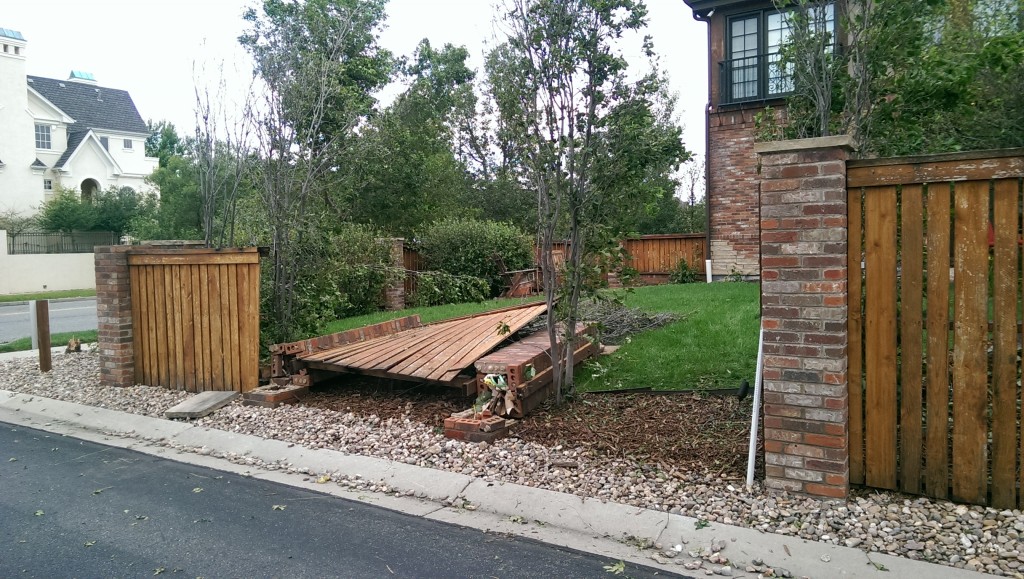 Those are brick columns.

I called Carol back – she was surfing news on her iPad; the girls had headed to the basement.  The crowd of Costco seemed light but stable, and engaged in filling their carts. Some were in raincoats, meaning the consumption imperative had trumped the survival imperative. Evolutionary biology probably has something to say about this. 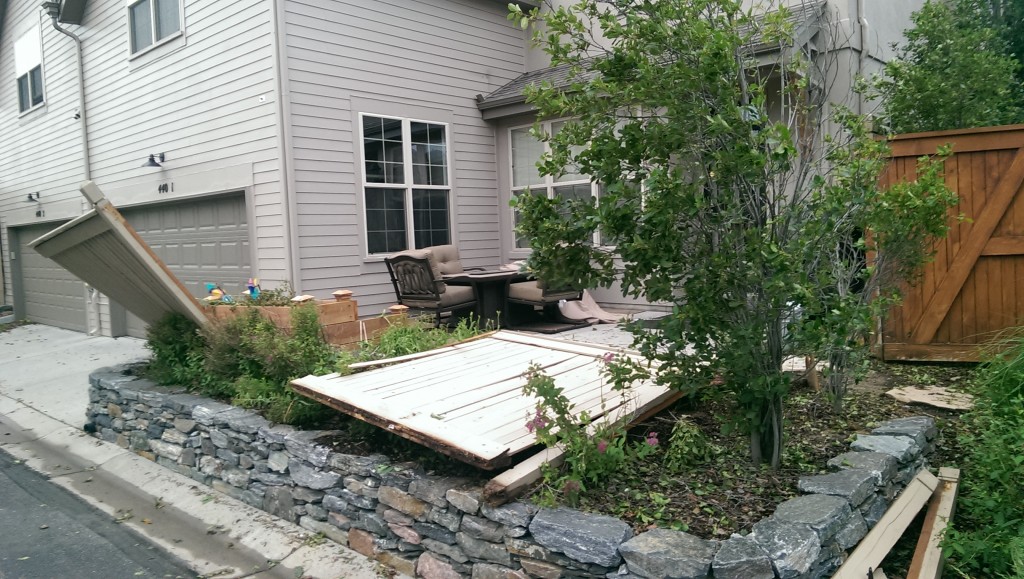 I waited until it was merely raining and drove home. The girls described the storm scene excitedly. Carol showed me a welt on her thigh – from a single hailstone. I took stock of the shredded vegetation and picked up inch-plus diameter hailstones, which were, for the record, agglomerations of standard hailstones frozen together. The open Royal Crest Dairy cooler on the front porch held two-plus inches of hail-water that had fallen in 35 minutes. The nuggets did a number on our window stripping and screens, and, probably roof. The tomatoes had been reduced to green sticks. But a quarter-mile south… well, the pictures tell that story. And just now a bit ago, from the National Weather Service:

On Wednesday, June 24th between 4:48pm and 5:10 pm, a tornado touched down in east Denver and west Aurora. The tornado first touched down near Quebec and 6th Ave. It then moved east-northeast across the Lowery Campus into the west part of Aurora. The tornado then lifted near Mount Nebo Memorial Park. Based on tree damage there was low end EF1 with wind speeds estimated in the 86-90 mph range. Most of the damage caused by the tornado was in the EF0 range. Some homes had minor roof damage with one former apartment building on the Lowry Campus having some higher end roof damage with estimated wind speeds in the 86-90 mph range. The tornado path length based on damage points was 2.8 miles and the width was less than 50 yards. 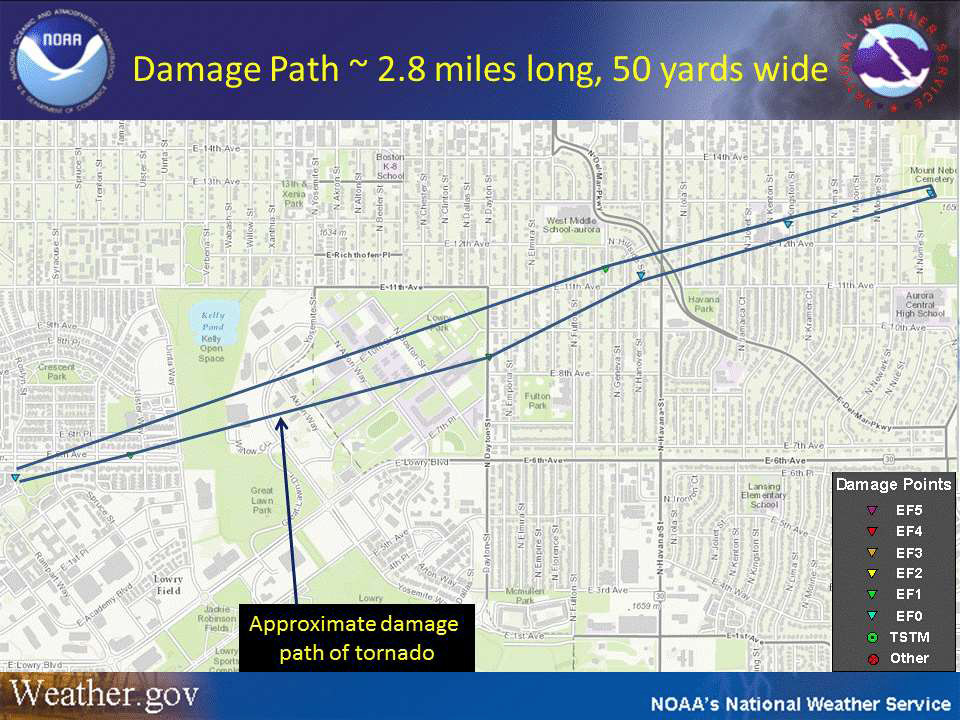 And a few more from the house: 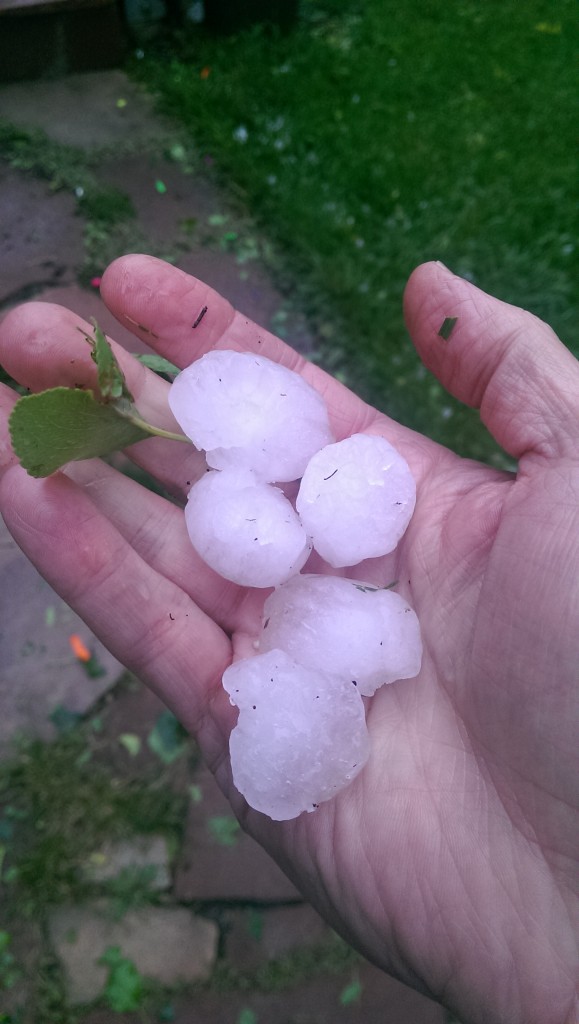 A few hailstones (45 minutes after they fell, so diminished) 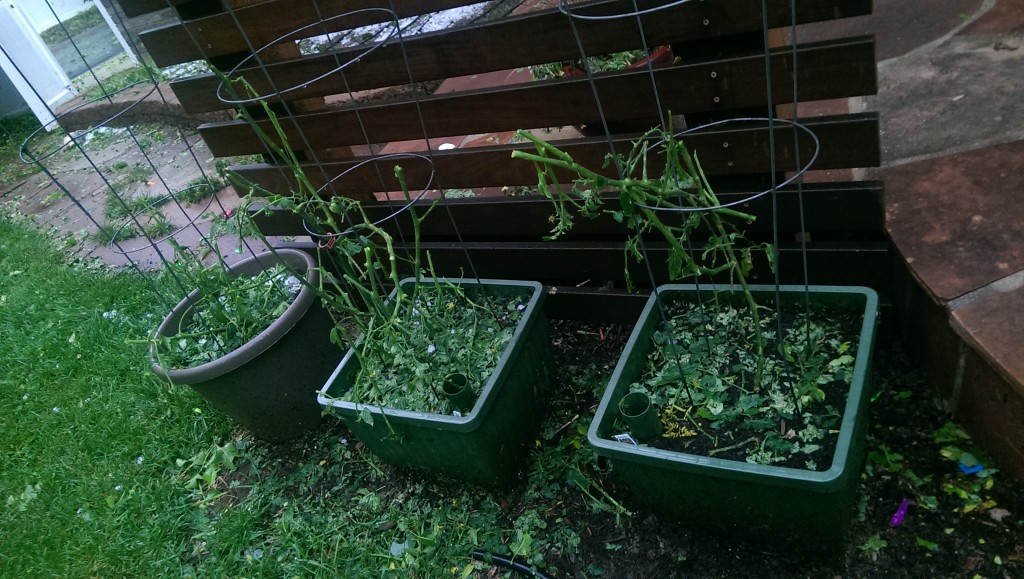 The tomatoes are not quite thriving anymore. 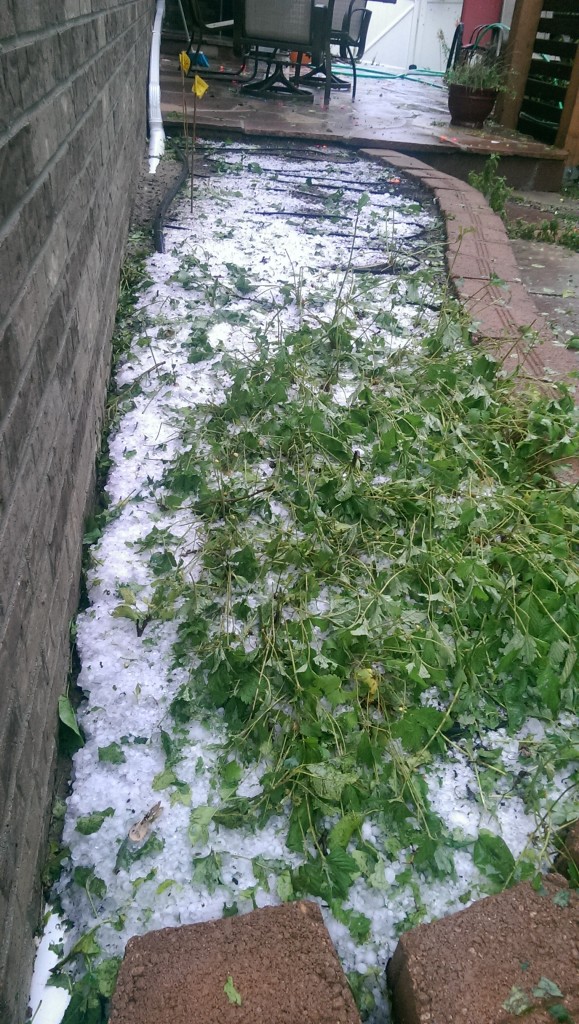 These were, until recently, strawberries. 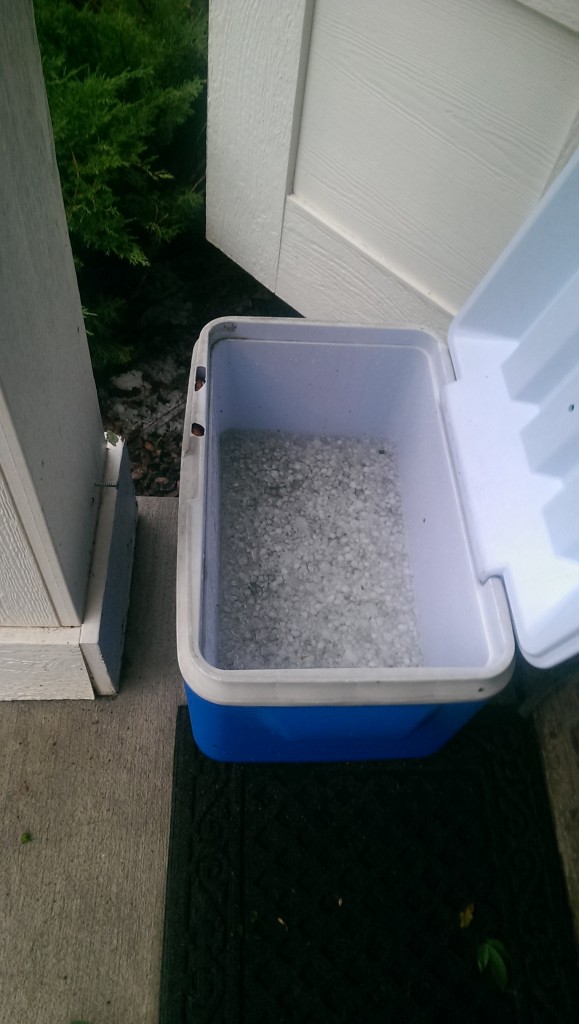