HomeMedia54.7 reasons the USMNT did as well as it did

54.7 reasons the USMNT did as well as it did 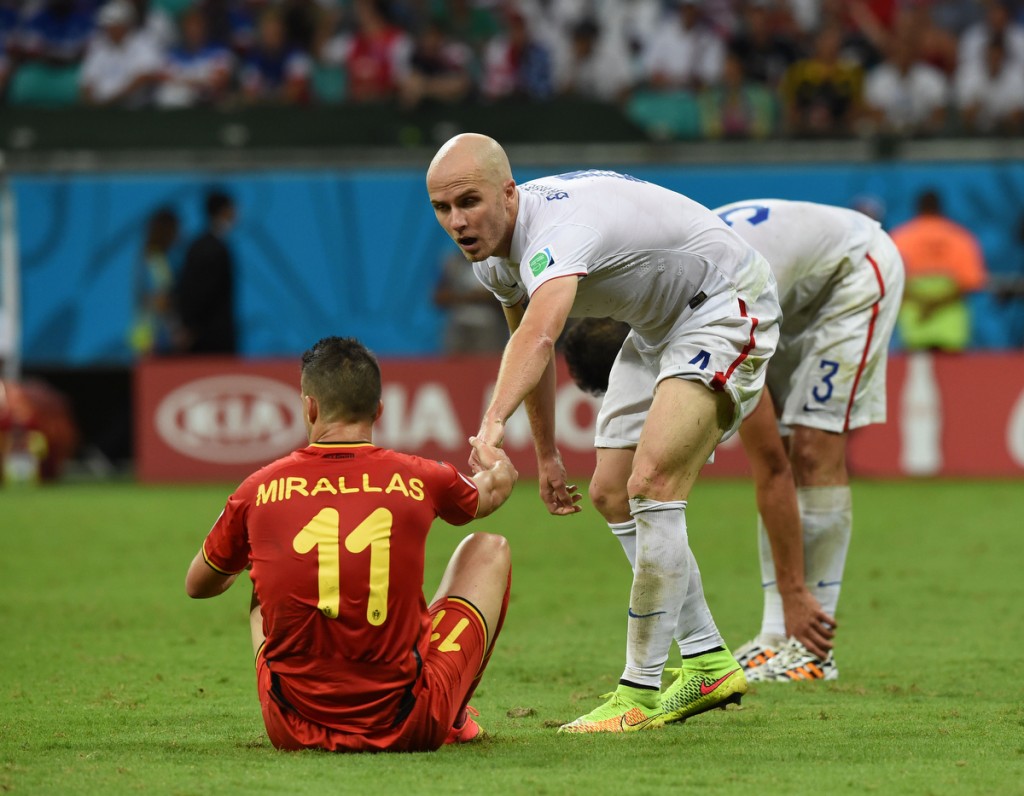 Given how hard Michael Bradley worked, the Belgian should be helping him up. (courtesy U.S. Soccer)

The number 54.7 is a big part of the reason the United States did as well as it did in the 2014 World Cup. Tim Howard’s otherworldly number of saves (16 against Belgium, a probable record) being another important one.

But 54.7 is how many kilometers Michael Bradley ran during his four World Cup matches. That’s more than any other player through the round of sixteen (16 teams had played four games; 16 three). For the  metrically challenged (I’ll admit, this has no visceral meaning to me, 54.7 kilometers), that’s 34 miles. That’s 8.5 miles per game.

Most people can’t run 8.5 miles at all. For those who can, try running it doing a combination of shuttle sprints, intervals and 60-yard sprints, interspersed with occasional walking and jogging. Actually, don’t try it. You’ll hurt yourself.

This would be inhuman output for a skinny dude. Bradley is six-foot-two and lugs 180 pounds around the field. He also had to control the ball, control the midfield, control the U.S. game. He went as fast as 19.2 mph (this is a decent pace on a road bike) He seemed as sharp in the 120th minute of the Belgium loss as in the first. It was unbelievable. 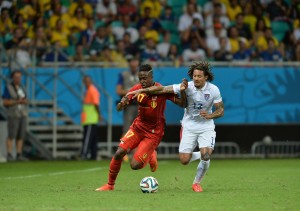 Jermaine Jones, about to kick a poor Belgian’s ass.

Bradley ran farther than any other player in the World Cup through four games, according to FIFA. Marcelo Diaz, a Chilean midfielder, ran the second most, 52.2 kilometers. The third most? U.S. midfielder Jermaine Jones, at 47.6 kilometers. He’s six feet tall and weighs 175 pounds and has 0.00003 percent body fat (mostly tattoo ink). Jones ran 7.4 miles per game, physically abusing essentially every opponent he faced along the way (it was teammate Alejandro Bedoya who broke his nose, remember). Jones was the most formidable beast in the tournament, with the possible exceptions of Argentine holding midfielder Javier Mascherano and Dutch criminal Nigel de Jong (out with a groin pull, looks like — serves the bastard right).

Clint Dempsey ran the fourteenth-most. He’s six-foot-one, 170 pounds and ran 45.4 kilometers, much of it with a broken nose (a Ghanaian high kick). He scored goals and was the most creative player on the offensive front.

The United States had three players among the fifteen hardest-working in the World Cup to the point they exited. Only Chile and — no surprise here — Germany, had as many. U.S. coach Jürgen Klinsmann revamped the German conditioning program prior to the 2006 World Cup, in which the team overachieved to a third-place finish.

The U.S. clearly doesn’t lack in skill. But they have no Nani, no Christiano Ronaldo, no Asamoah Gyan, no Eden Hazard, no Mesut Özil or Thomas Müller (I love umlauts – don’t you? They’re like horizontal almost-smileys 🙂 ). The U.S. is not, man-for-man, as good as any of the teams they played. Look at the clubs they play for, their salaries.

Yet they got out of the Group of Death.

You might attribute this to “heart,” which seems popular among commentators.

I read a great Jack Dempsey (no relation to Clint) quote in The Week this morning: “A champion is someone who gets up when he can’t get up.” I didn’t see a lot of quitters on the other teams, though, either (Cameroon perhaps the exception). These are extremely elite athletes. They’re all pretty much champions, on every team.

The difference was conditioning. Klinsmann understood that, lacking the best soccer players in the tournament, he would ensure that his team, physically freakish, by and large, to begin with, was beaten into such incredible physical condition that they could run other teams to death, if need be. Call it the evolutionary approach to soccer, if you buy into the theory that endurance is what made humans human to begin with — so they could run their prey to death.

So even if the World Cup 2014 run is history, the example the USMNT has set — and the approach they’ve taken — bodes well for a U.S. soccer establishment. We are rare among the 32 teams that qualified in that we can reasonably expect strides forward in terms of skill and technique. We’re among the few developing-soccer countries among the 32 (Australia, Japan and Korea probably qualify also). MLS (no, not the real estate thing) is already more popular than MLB among kids. The ball is rolling, and we’ll only be able to control it better and better — while running our opponents to death.